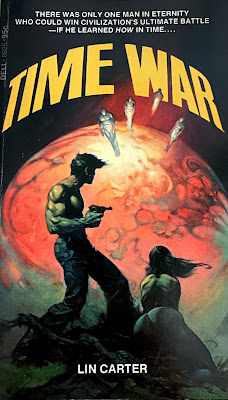 Lin Carter (Linwood Vrooman Carter, 1930-1988) was a longtime science-fiction and fantasy fan. Along with his writing mentor, L. Sprague de Camp, he authored a number of Conan novels either as original tales, or by finishing original, unfinished drafts by Robert E. Howard. He also contributed edits to Howard's Kull character while also creating his own series titles like Gondwane, Terra Magica, and Thongor of Valkarth. Carter only authored a few stand-alone novels, one of which is the science-fiction novel Time War. It was originally published by Dell in 1974 with an amazing cover by Frank Frazetta. It was reprinted by Wildside Press in 2021 in both physical and digital editions.

John Lux is a scientist, industrialist, entrepreneur, and a military veteran. He's also the target of an invisible assassin. In the book's opening pages, John is shot at by an invisible force that somehow lifted his own revolver from his desk drawer. In another murder attempt, John is nearly run over in the street by a maniacal driver. Why is he being targeted for assassination by this intelligent, murderous entity?

After visiting a local friend and professor, John awakens the next day to learn the man is dead and the police are searching for him as the prime suspect. On the run from the police and an assassin, John learns more about his nightmarish predicament from a strange woman who claims she is from the future. Her explanation of John's trials and tribulations is similar to that of Skynet and John Connor, two time-traveling opponents that battle through the years in the popular Terminator franchise of movies, books, and comics.

In the future, Earth's population is pampered in a sprawling urban metropolis known as the Living City, governed by a super computer. It is here that civilization has spiraled into a luxurious world where every want and need is supplied by the city. Because of this slothful lifestyle, humans have evolved into simply existing with no ability to think for themselves. They can no longer survive without the assistance of the computer, thus the development of this long-lasting parent-child nurturing. Instant entitlement and gratification is the way of existence.

John learns that this computer has built a cocoon around the city, a nearly impenetrable shield that protects everything and keeps this rather elementary form of living intact. But, a rebellion created a Weapon Machine to destroy the computer, only it is stuck inside the shield with no way to penetrate the exterior, and no method of retreating. To John's surprise, he learns he is the only human in existence that has neuro-radiontic powers. In essence, he is a time-traveling superhuman that can teleport himself anywhere. Since his powers are new and underused, this dormant skill can only be utilized if his body is facing an emergency. Thus, these future agents are attempting to kill John to awaken his ability to teleport. If he can teleport through time, and through this city shield, he can bring the Weapon Machine to its destination and liberate humanity.

The author's note from Carter states that he authored Time War as an affectionate tribute to author A.E. van Voget, a contributor to the Golden Age of mature science-fiction led by John W. Campbell Jr. and his Campbellion revolution. In doing so, Carter inputs a lot of startling social awareness into his precognitive narrative on mankind's modern dependence on technology. Much of Carter's future, filled with frivolousness and a rudimentary need for immediate satisfaction, resembles our present. While it isn't preachy or chastising, Time War certainly predicts and warns of many present day struggles.

As an action-oriented science-fiction novel, I found the narrative was busy and bogged down with explanations of what, when, where, and how. There just wasn't enough space to allow the anticipated front-cover action to develop properly. I encourage short novels, but the 150 page count was too short in this instance. If you love a dense, smart story, then Time War should be a wonderful experience. Those of you looking for a soaring stellar war should look elsewhere.