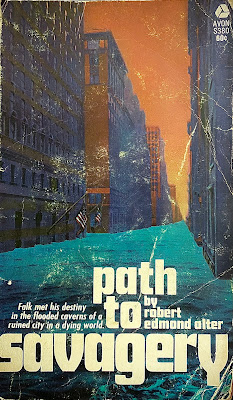 According to Mystery File, Robert Edmond Alter authored over 40 stories for magazines and digests like Mike Shayne, Man from UNCLE, Argosy, Alfred Hitchcock Mystery Magazine, and Manhunt. He wrote two novels that were published by Fawcett Gold Medal, Swamp Sister in 1961 and Carny Kill in 1966. Both of those were reprinted by Black Lizard in 1993. We reviewed Swamp Sister in 2020 and it failed to impress us, but we went back to the well again with Alter’s novel Path to Savagery. It was published posthumously by Avon in 1969, three years after Alter's death. The post-apocalyptic novel was adapted into the 1979 Sony Pictures film The Ravagers starring Ernest Borgnine and Richard Harris.

The book is set about 20 years after a global nuclear war. What's left are large swaths of wilderness, packs of wild dogs, and large cities that have mostly been ransacked. On the coasts, some of these cities are now marshy islands due to excessive flooding from broken seawalls. Civilization now exists in three classes. Flockers guard their food, water, and weapons and exist in packs. Neanderthalers are your common savages that use barbarism on a quest for dominance. The Loners are guys like Falk, the book's protagonist, that simply exist as troubadours scouring the countryside for supplies in an effort to live a peaceful existence. But, Falk packs a .45 and a Thompson submachine gun in case things get hairy.

The first thing you need to know is that Path to Savagery is nearly awesome. It begins and ends with total awesomeness. What's in the middle is just plain 'ole great. Alter's pace is sometimes sluggish, but at 174 pages he spends productive time on characterization, something that was not afforded to him writing shorts. His descriptions were so vivid and real. For example, in the book's opening pages, Falk finds a dark, cavernous mansion that's been ransacked and abandoned. Bad guys follow him inside, hoping for a quick and quiet kill. Alter's descriptions of Falk fighting the enemy in the dark mansion's bedrooms and hallway were exhilarating. I loved that Falk couldn't see his attacker's faces until they were illuminated by his gun's muzzle flashes.

Falk moves through the bogs and brambles and stumbles upon a woman named Faina, which he buys for the night using spare tobacco. Faina becomes a supporting character and surprises Falk when he reaches a flooded coastal city. In what becomes the book's central location, Falk and Faina find a large, multilevel department store. The store has different sections like sporting goods, housewares, furniture, camping, clothing, etc. This large department store becomes a hunting ground when Falk and Faina discover it is occupied by a large band of Flockers.

Without spoiling too much of the story, Falk and the leader of the Flockers, a strong, combative man named Rann, enter a contest of survival. Each of them enters the department store naked without weapons. Once inside the enormous store, they can use anything they find as a weapon to hunt and kill their opponent. Falk and Rann's battle will determine the winner of the tribe's sexiest woman. Falk has a prior connection with the lady, so his efforts to kill Rann are elevated. Rann is fighting to hold his place as tribal leader.

Needless to say, the idea of living in an abandoned shopping mall is a neat one. Alter makes fun use of this combat arena and adds in some surprising elements that add a dose of horror to the narrative. There is a crime-fiction ingredient as well when Rann conspires with another Flocker to secretly murder someone. The book's premise borders on both science-fiction and post-apocalyptic, making this alternate version of Earth a pretty scary place.

Despite reading tons of doomsday fiction, and viewing an equal assortment of genre films, I was thoroughly pleased with the book's innovation and ideas. Alter really had a great thing going and I can't help but think this would have been a series if he would have lived long enough to tell it. Unfortunately, Path to Savagery is all we have of this great concept.