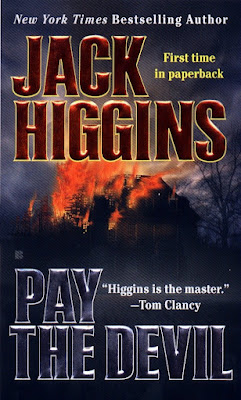 There's no doubt that Jack Higgins, real name Henry Patterson, is a household name and one of the cornerstones of the second generation of action-adventure novelists. By the mid-1970s, most of the author's literary work from the late 1950s through the 1970s was re-published as paperbacks under the name familiar name of Higgins. Patterson's 1963 hardback novel, Pay the Devil, was one of the few novels absent from the 1970s reprints. Oddly, the book wasn't released until 2000. It was revised and published as a paperback by Berkley.

While most of the author's novels are written as modern, high-adventure novels typically placed in the same time period as their publishing date. Pay the Devil is mainly set in 1865, just one year after the American Civil-War. The hero, Irish-American Clay Fitzgerald, is introduced in the book's prologue (which I believe was written decades later as an addition to the book's reprint) as a Confederate Brigadier General. This exciting prologue has Fitzgerald and his tattered band of rebels receiving orders that General Lee is surrendering the Confederacy at Appomattox, Virginia. Knowing the war is now over, Fitzgerald and his men come to the aid of a young man who is being lynched. These early pages show readers that Fitzgerald is not only a respectable man of action, but also a trained battlefield surgeon. These elements are both important to the narrative.

After the surrender, Fitzgerald learns that his Uncle has died in Ireland and that his inheritance is waiting. The book then resumes the action one-year later as Fitzgerald and his friend Josh arrive in the Irish town of Drumore. There they learn that Fitzgerald's inheritance is a moderate amount of money and a burned estate. After an exchange with some of the residents, Fitzgerald learns that the town is essentially being bullied by Sir George Hamilton. As a servant to the British, it's Hamilton's job to keep the Irish poor and famished. Fitzgerald, fearing the Irish will never gain independence, assumes a neutral role. But after seeing the town's exhaustive efforts to fight back, Fitzgerald dons a costume and assumes the identity of a folk hero vigilante named Captain Swing. As this masked rider, Fitzgerald fights for the people.

This was a really different Jack Higgins novel. While not a traditional western, it's more like Higgins' version of Batman. While there's plenty of action, Fitzgerald's role as caregiver to the poor really defines the character. By day, Fitzgerald can rub shoulders with Irish and British aristocracy, but at night his surgical skills and fighting demeanor resembles a pulpy sort of hero. With a saber and Dragoon, this character represents nobility and pride, a continuation of his background in the American Civil-War – one war just exchanged for another.

As a fan of Higgins, I can't find anything not to like about Pay the Devil. I am a little puzzled on why this novel wasn't reprinted decades earlier. Perhaps the author's iconic World War II and nautical themes were so overpowering that publishers didn't wish to risk his literary dominance at that point. While it's a different time period, the author's heroes are nearly interchangeable. This book should please the author's immense fanbase, but also could serve as a pulpy alternative western for lovers of Lone Ranger, Masked Rider, and other old west adventures.