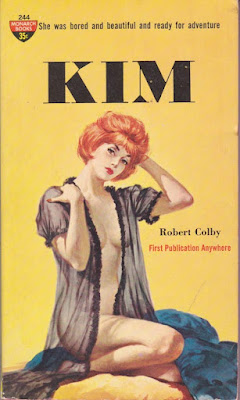 With 17 novels and dozens of short stories to his name, Robert Colby remains one of my favorite authors of the paperback original era. Kim was a 1962 hardboiled private-eye mystery mispackaged as a sex novel by Monarch Books. It remains available today from two separate reprint publishers - Wildside Press and Prologue Books.

The narrator is Miami private detective Rod Striker whose practice involves helping wealthy clients with personal problems. His latest client is rich Aunt Martha, who is concerned about her 22 year-old niece, Kim. She’s engaged to a nice boy, but she had a fling with a local strip club pimp named Eddie Tarino who runs a sex-for-pay boat between Miami and the Bahamas. Tarino wants Kim on board as his personal escort and is threatening her fiancé and aunt with physical harm if Kim doesn’t comply. Aunt Martha wants Striker to drag Tarino into a dark alley and beat him until he begs for mercy and promises to stay away from Kim.

Rather than beginning the assignment with violence, Striker decides to visit Tarino and talk some sense to the pimp. The meeting of these two Alpha Males is really something special, and Striker discovers that there’s way more to the story than his client initially understood. He also follows up with Kim, who —as expected — is a dish to end all dishes The author’s description of her cans will stay with me forever.

Striker has a partner at his PI agency named Myra. She’s a beautiful 29 year-old ex-cop from Los Angeles. The author does a great job describing her to make every man reading the novel fall in love with her. Striker and Myra are occasionally romantically involved, although the relationship is mostly business. Much later in the novel, the first-person narration switches from Striker to Myra. I normally hate that crap, but it worked this time because they’re both awesome characters.

A mystery arises for Striker and Myra to solve:  Who is pulling the strings behind this manipulation of Kim? There are sex scenes along the way, and they’re white-hot in a 1962 kinda way. To be clear, this is a first-class hardboiled mystery with two great leads. The paperback had some pacing problems in the second half, but the twisty conclusion was straight aces.

Bottom Line: Another winner from Robert Colby. Go ahead and add this one to your reading queue.