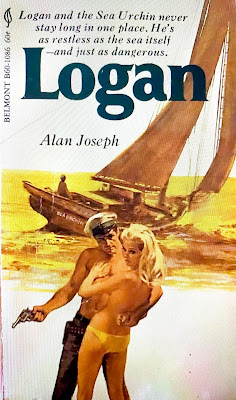 Jon Messmann created the long-running and highly successful western series The Trailsman, as well as other series titles like The Revenger and The Handyman. We have explored numerous novels by Messmann and mostly love all of them. Both Brash Books and Cutting Edge have performed a remarkable public service by reprinting most of Messmann's bibliography in brand new editions with modern artwork and short essays about his work.

Cutting Edge's most recent release is the two-book Logan series, a character that Messmann created in the style of John D. MacDonald's popular Travis McGee series. Messmann authored both Logan and Killers at Sea under the pseudonym Alan Joseph. These books were originally published in 1970 and have remained out of print until now. I'm beginning with the series debut, Logan.

Not much is known about Logan other than he has some sort of combat history, owns a speedy boat simply called Sea Urchin, and is kind of a jerk. In the briefest of backstories, Messmann hints that Logan has experienced some sort of tragedy in his life that makes him this despondent, rather miserable person. But, he has a soft heart for charity, namely a nun named Mary Angela in Kenya. When Logan completes odd jobs, like chartering or salvaging, he sends most of his earnings to her with a letter thanking her for prior help.

In Panama, a man asks Logan to perform a job for $10,000. Not liking the guy, or the vagueness of the task, Logan kicks him off of his boat. Later, Logan returns to his boat with a beautiful young woman only to find a corpse on the downstairs deck. The Panamanian police arrive and all fingers point at Logan as the prime suspect. He's been framed. 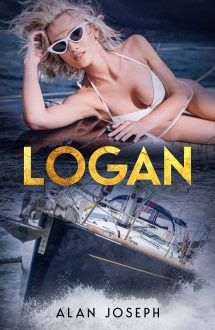 An emissary from the Peruvian government arrives at the jail and advises Logan they can make the charges go away if he simply agrees to the $10,000 job. He explains that their government is having a problem with a left-wing revolutionary group led by a man named Panico. Peru feels that they have finally killed Panico, but need positive ID. The body has been buried in a remote village and Peru feels as though one of their men will easily be spotted by guerrilla forces. A man like Logan can travel to the village by water under the disguise of a hunter or trapper. Once there, Logan's companion, a Peru woman who dated Panico, can make the positive ID. Mission over, collect $10K. Simple, right?

Messmann is in his wheelhouse with this high-octane, action-adventure yarn. Like his characters Jefferson Boone: Handyman and Skye Fargo, Logan is the author's formulaic, bull-headed man's man. He's handy with the ladies, gets laid a lot, and offers no lasting promises or commitments. In terms of rebellion and angst, Logan is 110% against-the-grain. He chooses painful opposition over smooth conformity despite the overwhelming odds. But, he always wins.

Thankfully, Cutting Edge realizes Messmann's storytelling talent and have re-introduced these fun novels for a new generation of readers. As a nautical escape, Logan succeeds with it's fast-paced, calculated action. There's an ample amount of sex and violence contained in Messmann's propulsive plot to please fans of popcorn action-adventure fiction. There's nothing to dislike about Logan, and I'm looking forward to this book's sequel, Killers at Sea.