The Razorblades in my Head 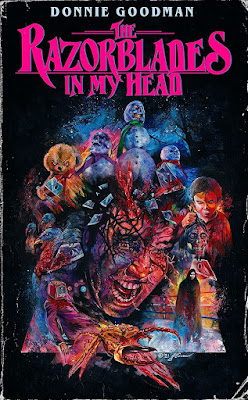 According to his Amazon bio, Donnie Goodman runs the YouTube show The Horror Hypotheses and loves reading, book shopping, and playing video games. The Central Virginia native is a fan of Paperbacks from Hell and enjoys writing. His short stories have appeared in anthologies like Gorefest and Served Cold. In June of 2021, Goodman self-published his short story collection The Razorblades in my Head with a colorful and terrifying cover by Justin T. Coons. As a fan of horror and a native of Central Virginia myself, I was drawn to this macabre collection.

The book is 140 pages long and features 12 shorts, original black and white cover sketches, and notes from the author on what inspired each story. I'm not a short story enthusiast, but Stephen King's Night Shift, Skeleton Crew, and Nightmares & Dreamscapes were always on hand throughout my childhood. I appreciate the art form, but prefer novellas if it isn't a full-length. That being said, Goodman's work was really enjoyable. This is his first collection and I would imagine some of these stories have been with him for a long time.

Here are a few stories that I found as real highlights of Goodman's storytelling talent:

“The Stranger in the Squared Circle” is about Goodman's love of professional wrestling, entertainment that he describes as “the last bastion of true performance art in modern culture.” I love wrestling as well, so the idea of a vampire story set in the wild world of independent wrestling was appealing. It's written in first-person by an indy wrestler named Luke (indy meaning not contracted to one of the bigger organizations like WWE). He's a veteran of the indy circuit and starting to draw bigger money in Japan. So, it's with great hesitancy that he agrees to fill in at a local show from an old wrestling promoter named Jim. The gig is at a small, but packed venue, where Jim hoped to have a big main event. But, the headliner has gone missing in Mexico, so Jim wants Luke as the replacement. But, his opponent is a mysterious international wrestler called The Stranger, a performer Luke isn't familiar with. Jim shows Luke a video tape of an archived performance where it appears that The Stranger has supernatural agility and strength. It also looks like The Stranger legitimately kills his opponent. The Stranger may be the strangest opponent he has ever faced. The story is perfectly plotted with a great beginning, a compelling narrative, and a rousing finale. If this is a sign of things to come, Goodman is going to be a rock star.

“The Old Bay King” is set on Virginia's eastern shores and features two likable, struggling crabbers that owe a loan-shark named Otis. Hoping to eventually make ends meet, they head north looking for a big haul. At sea, they discover an old abandoned ship. Inside are human remains and a huge box of solid gold covered in ancient writings. The two haul the box back to their ship, but run afoul of Otis and his enforcers. When he attempts to take the gold, all Hell truly breaks loose. Again, this was written in first-person and is one of the longer stories featured. I loved the atmosphere and characters, and Goodman's pacing was fantastic. This is Goodman at the top of his game.

“Hourglass” is an example of what Goodman feels is true horror - “a gated community with a homeowner's association.” I've been there and done that, and couldn't possibly agree more. This story reminds me of Bentley Little with its dark nod to the funny side of horror. It's a fairly simple story about a group of suburban men that make violent sacrifices in their garage. It's symbolic of greed and the sense of entitlement in pursuit of self-interest. I loved the story and it is set in a community called Greenfields, a place that Goodman uses in another story about killer snowmen called “Magic in the Hat.”

Razorblades in my Head represents an author that is passionate about literary horror. His stories resonate with a deep, disturbing look at our culture and the negative impact it creates. From snooty gated community residents to post-apocalyptic visions, Goodman isn't afraid to cross multiple sub-genres. This collection includes spatter-punk, crime-fiction, traditional horror, and the Creepy Pasta styled shorter shorts. I love his imagination, passion, and talent and to coin an overly-used phrase...he could be the next big thing. Recommended.