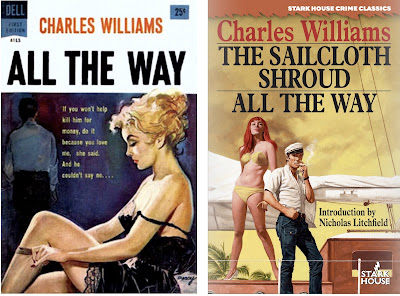 Charles Williams (1909-1975) was the best American author of 20th century crime-noir fiction that most Americans have never encountered. Thanks to some smart reprint publishers, his work is being introduced to a new generation of readers looking for propulsive plotting and gritty, vivid characterizations. All the Way was a 1958 paperback also released under the title The Concrete Flamingo that has been reprinted by Stark House.

The narrator is a drifter named Jerry Forbes, who’s in Key West, Florida when he spots a sexy dame on the beach giving him the eye. Her name is Marian Forsyth, and she’s a secretary in a small Louisiana town. From the moment they meet, Jerry knows that Marian has a hidden agenda. Even the sex between them feels transactional. For those who read a lot of these types of books, this dame has femme fatale written all over her.

After getting to know one another a bit, Marian proposes an idea to Jerry. She needs Jerry to impersonate her boss to move money from a stock account into their hands as a prelude to murdering the boss. Marian used to be his mistress, and he failed to marry her. Hell hath no fury and all that.

As usual, Williams’ writing is head-and-shoulders better than his contemporaries. The monologues he wrote for Marian explaining the humiliation she suffered at the hands of her boss are staggering. The book is a bit of a slow burn, but Williams keeps the emotions running high, so the reader understands the narrator’s anxious longing for this woman bent on destroying another man.

All the Way is basically the story of a complex and dicey long con. It’s an inventive paperback, but you need to be patient with the novel’s sluggish pace. This elaborate identity theft scheme doesn’t unfold with breakneck action. This culminates in one of the most bleak and tragic conclusions I can remember reading in ages.

All the Way was compelling and interesting, but I don’t think it’s top-shelf Charles Williams. It would have been more impactful as a 50-page novella in Manhunt Magazine. If you’re working your way through Williams’ entire body of work, you’ll probably enjoy the novel just fine, but don’t make this your first stop.