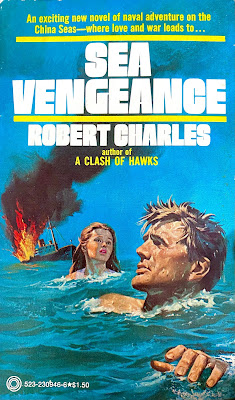 British author Robert Leader (b. 1938) had worked as a Merchant Marine, bartender, and a factory worker before becoming a full-time novelist. He wrote over 200 short stories and sold them to magazines like Reveille, Titbits, London Evening News and London Mystery. He found success authoring a series of 10 espionage thrillers starring British agent Simon Larren. Collectively, British publisher Robert Hale published over 40 of his novels, most authored under his real name or pseudonyms like Robert Charles or Robert Brandon. Some were exported to the U.S. by Pinnacle. My first experience with the author is his 1974 novel Sea Vengeance. It was published in the U.S. by Pinnacle with a cover by Phil Marini.

The first few chapters of Sea Vengeance plays out like the exciting 1992 Steven Seagal action film Under Siege.  Chief Officer John Steele, a Korean War veteran, is working on board the Shantung as it departs embattled Saigon en route to peaceful Singapore. The large ship features eight cabins, each containing a diverse variety of passengers. Within a few hours, Steele and the crew discover that the group of Buddhist monks on board are actually Viet Cong hijackers. They kill a few of the Shantung crew and severely injure its Captain.

With the ship under command of a Viet Cong leader named Thang, Steele works in stealth to capture weapons and free passengers. His betrayal comes from an unlikely suspect, a lover he has met on board named Lin Chi. Together, Chi, Thang, and the Viet Cong have plans to use the ship to rescue a number of their allies from a small prison camp off the coast of  battle-torn Vietnam.

At 182 pages, Sea Vengeance is brimming over with exciting danger and intrigue. Steele proves to be the capable hero – admirable, courageous, and willing to sacrifice his life for others. As a propulsive action yarn, the scenes with Steele secretly working “behind the enemy” to secure the ship was really engaging. With the author's vast experience on merchant ships, I found some of these scenes had a sense of realism. While Steele's struggles with the Viet Cong on the ship were effective, page turning events, I applaud the author's introspective commentary.

The combatants in the Vietnam War are presented positively by the author, both condemnation and worthy appraisal provided through a philosophical look at war and its aftermath. This isn't a stretch from Leader's wheelhouse considering he has written a number of non-fiction books on religion, philosophy, and his travel experiences. He certainly has the credentials and education to provide thought-provoking dialogue between these volatile characters. I found that to be one of the biggest highlights.

If you enjoy Vietnam military history, or love a great nautical or war story, then Sea Vengeance is highly recommended. I found it to be similar to Australian author James Edmond Macdonnell's series of World War 2 novels starring Captain Walt Kenyon. Just don't be surprised with some of the heavy dialogue sequences. While it doesn't bog the narrative down, it may slow the excitement for those of you looking for just head-on carnage.