Counter-Terror #01 - Hour of the Wolf 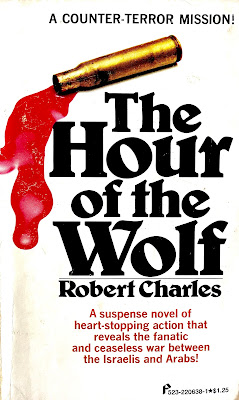 The Counter-Terror series, authored by Robert Leader under the pseudonym Robert Charles, was published between 1974 through 1980. The eight-book series was released by Robert Hale in England  and by Pinnacle in the U.S. I enjoyed Leader's stand-alone novel Sea Vengeance, so I was anxious to try this Counter-Terror series debut, Hour of the Wolf. It's compared to the fiction of authors like Eric Ambler and Frederick Forsyth.

After the deadly terrorist attack at the Munich Olympics in 1972, lots of authors began writing “counter terrorist” series and novels. Hour of the Wolf is spawned from that horrific act as a group of Palestinian refugees are banded together in an international terrorist plot. The Wolf is Abdel Rahmin Marani, a veteran of war during Black September in 1970. His quest for bloodshed is an effort to bring attention to Palestine's refugee camps and the atrocities he feels are committed there.

To combat worldwide terror, a Counter-Terror team is created by the British military. It is coordinated through international channels that involves French and Italian Intelligence, West German State Police, the British military and features the series star, Detective Inspector Mark Nicolson in New Scotland Yard. Collectively, this team will work within their own agencies and divisions, but will also share intelligence on terrorism. The goal is to lower the walls of their own respective authority in an advancement of security, preparation, and planning.

Hour of the Wolf is less than 200 pages, but divided into three separate parts to fit the trilogy narrative. The first part is the Wolf's recruitment and planning, the second is set in Japan, and the final part situated in London. The operation is rather simple.

Due to the IRA's frequency of attacks to liberate Northern Ireland, the British population has become desensitized. Shootings, bombings, and senseless murder is so common that the attacks aren't creating the desired impact or reinforcing the message. A small cell of the IRA agrees to detonate a bomb in Japan to gain notoriety in another part of the world. In return, the Japanese terrorist group The Red Army will attack a large population of Jews at an Israeli airport. To complete this nightmare trifecta, the Palestine Liberation Army will attack London.

The first thing to know is that Hour of the Wolf is pretty darn good. It isn't your rudimentary team-commando series. There's a great deal of intelligence, inner-workings, and networking that takes place over the course of the narrative. It isn't necessarily a slow-burn, but it's not a standard Phoenix Force shoot 'em up. Like Sea Vengeance, the author provides a lot of historical data to cement each character's position. These history lessons were informative, bringing to light the refugee camps, the displacement of non-Jews in that region post-WW2, and the Middle East struggles that still affect the modern world today.

As a compelling espionage thriller, Hour of the Wolf delivers the goods. While the team members will change, I'm interested in learning more about Mark Nicolson and his ordeals and trials as this series further explores international terrorism. It's a series I'm really excited about, so I'll be searching for the other installments.