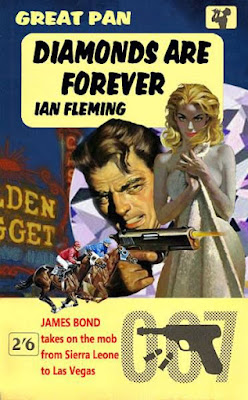 Diamonds Are Forever is the fourth installment of Ian Fleming's wildly successful James Bond series of spy-thrillers. It was originally published by Jonathan Cape in the U.K. in 1956. The novel's central theme is diamond smuggling, a criminal operation that intrigued Fleming enough to not only use it as a plot, but also a non-fiction book he wrote in 1957, The Dimaond Smugglers. In 1971, the novel was adapted into the seventh James Bond film.

In the book's opening chapters, Bond and his superior M engage in a deep discussion about the diamond industry. At the time, England was importing diamonds from Africa and then selling large amounts to various international companies and countries. It made up a large percentage of the country's income and represented what would ultimately be one of the largest diamond exporting operations. One of the largest buyers, House of Diamonds, has reduced their purchases of English diamonds, creating a financial gap in the Brits lucrative business.

It's explained that House of Diamonds is a legitimate business owned and controlled by an American mob family named The Spangs. M, and the Special Branch, suspect that a criminal element has been introduced which is creating the rift. House of Diamonds surely must be obtaining their diamonds by smuggling them in at a cheaper price. M wants Bond to investigate the operation by infiltrating the smuggling ring into New York and Las Vegas under the disguise of a common burglar named Peter Franks. He wants Bond to engage in the job and then converse with a woman named Tiffany Case, one of the gang members involved in the smuggling.

Bond's journey is quite epic, first beginning in New York to retrieve the smuggling money owed on the latest smuggle. His payer is a gang leader named Shady Tree. He explains that their operation doesn't just pay out the full payment for security reasons. To fulfill his payout to Bond, aka Peter Franks, he orchestrates a number of rigged gambling ventures that will produce fragmented payments. The first payout is an exciting stretch at a rigged horse race in Saratoga. Then, a rigged blackjack game in Las Vegas dealt by Tiffany. But, Bond flips the score and pays off the jockey to disrupt the payoff and then wins too much money at blackjack.

If I provide anything else pertaining to the story, it's going to provoke you to skip Ian Fleming and just read me. I'd never forgive myself. Here's the thing, read Diamonds Are Forever if you want to see Bond deeply entrenched in hardboiled danger. Fleming throws everything but the kitchen sink at readers: intrigue on a ship, danger in the desert, a train-car chase, torture, romance, and gunplay. The chemistry between Tiffany and Bond was perfect with both needing something from each other. Former American CIA agent Felix Leiter returns to this book and I found his addition to the story effective. My only real complaint is the “cowboy” appearance of one of the Spangs and the longer than necessary ending. Otherwise, Bond absolutely wins again. Recommended.