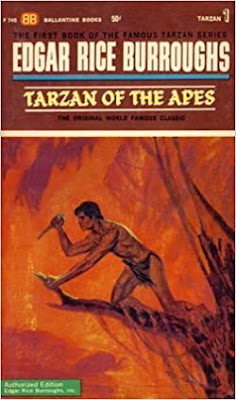 Many of the classic, more mainstream series titles or novels we discuss here at Paperback Warrior are presented from the perspective of a brand new reader. Novels from the likes of Ian Fleming, Jack London, Robert E. Howard, etc. have been devoured by millions of readers through many generations. However, for the most part they remain brand new to us. Aside from various media – comics, movies, television, non-fiction analysis – these classic literary works are a paradise of undiscovered gems. Slowly, we pull these classics from the rainy day stash to read and review. Thus, I've now arrived at Edgar Rice Burroughs' acclaimed 24 book series of novels starring the iconic Tarzan.

Tarzan of the Apes originally appeared in magazine format in the October, 1912 issue of All-Story. It was first published as a hardcover in 1914 and then later as a paperback by Ballantine in 1963 (with a cover painting by Dick Powers). It's a rather long novel at 220 pages of smaller paperback font size, making it a thorough and comprehensive origin story to kick off the series.

The book begins with explanations that John Clayton (known as Lord Greystoke or Viscount Greystoke) is a British Lord that has accepted an assignment by the British Colonial Office to investigate racial relations in West Africa. While excited for his new career boost, Clayton also feels dismayed that he must bring his pregnant wife Alice to a harsh landscape. En route to their destination, the crew of their passenger ship overthrows the Captain and nearly kill Clayton and his wife. Thanks to crew leader Black Michael, the couple is spared. Instead of being thrown overboard, Black Michael leaves them on the shores of a dense coastal jungle. In essence, the Claytons are marooned on a dangerous, unfamiliar island in the middle of nowhere. Death seems inevitable.

Through the book's first chapters, the narrative highlights the Claytons early determination to beat the odds. As the months go by, and a rescue seems unlikely, the hopes and determination begin to fade. Enclosing their meager existence is the menacing jungle wildlife, complete with roaring lions, ferocious apes, and other predatory animals. After Alice is nearly killed by an ape, she becomes emotionally unhinged. One year after giving birth to the couple's son, she dies from emotional distress. With great difficulty carrying the immense, lonely burden, Clayton simply gives up and is soon killed by a tribal king ape named Kerchak. A motherly ape named Kala, who just lost her own child, rescues the baby boy and raises him as her own. Thus, his name becomes Tarzan, which means “White Skin” in  the ape language.

As one would expect, the middle chapters are the proverbial coming-of-age narrative concerning Tarzan's childhood and transformation from the tribe's weakling to the savage “King of the Apes”. It's action-adventure focused as Tarzan becomes a skilled hunter, fighter, and leader of the tribe through various battles with other apes and wildlife. Tarzan spends his calm moments at his parents' small, makeshift cottage going through various trinkets and books, learning more about his own race and why he is different than the apes. He teaches himself to read and write based on the numerous baby books the Claytons had packed for their trip. Through these quiet moments, Tarzan takes the necessary steps to slowly evolve into a civilized man.

A couple of decades pass and then a new crew finds themselves marooned on this same island. This is how Tarzan meets young Jane Porter, his love interest and future wife. Ironically, Tarzan's cousin is one of the members of the party, William Clayton, son of Lord Greystoke (Tarzan's uncle). This portion of the narrative was really fragmented and uneven, with a number of characters involved in events in different locations on the island. Eventually, Jane is rescued by Tarzan after discovering his parents' cottage. She falls in love with him, but realizes he isn't civilized enough and would be unhappy anywhere other than the jungle. The book's finale concludes with Tarzan learning a modern way of existence through a French soldier named D'Arnot. The story's ending is a bit of a cliffhanger as Tarzan learns of his Clayton/Greystoke heritage, but withholds the information in an effort to allow Jane to marry William without complications.

Overall, Tarzan of the Apes was a fun reading experience, but I would be remiss if I didn't express that I was a little underwhelmed. After the lofty literary praise I've read about the book in my lifetime, I felt that the narrative was unnecessarily dense in spots. Further, there were way too many characters in the book's third act to enforce any sort of isolation or loneliness within the tight narrative. The action-adventure aspect was still intact, but only marginally so. I also felt that Tarzan's development from savage to civilized man was rushed too quickly. I really disliked the ending with the Wisconsin farm, Jane's economic situation, and the convenient forest fire. None of the elements conveyed the same enjoyment I experienced within the rural, dangerous jungle. Arguably, it was too cavalier, but I completely understand it is a product of the time.

With both its racial awkwardness and dominant masculinity paired with Burroughs documented eugenics support, Tarzan of the Apes doesn't age particularly well. The misguided beliefs about African culture was uncomfortable at times, but again, I do understand this was a controversial era with bad choices and uneducated world views. To read any early to mid-20th century literature does require some patience in that regard. But, I was generally pleased with the book's pacing, the main character, and some of the early events with the mutiny of the ship. I liked it enough to want to read the second installment.