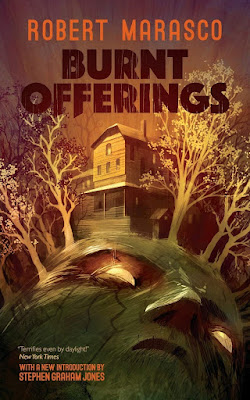 Horror luminaries Stephen King and Bentley Little have both acknowledged Burnt Offerings as an influence on their writing. The novel, authored by Robert Marasco, was originally published in 1973 and adapted into an MGM film in 1976. The book is available now as a reprint through Valancourt Books with an introduction by Stephen Graham Jones.

In the book, Ben and Marian Rolfe live in the crowded city of Queens, New York and are barely surviving the day to day hustle and bustle of work, marriage, and parenthood. The city is consuming them, eating away their existence and crushing their dreams and aspirations. Ben realizes this isn't a place to raise their young son David. In hopes of a fantastic family summer, Marian begins searching the classified ads for a summer place they can rent with their meager budget. Ben works as a professor, so Memorial Day through Labor Day affords them the opportunity to get away from it all.

Marian locates an advertisement for a summer house in upstate New York. It's an appealing invitation of private beach, pool, dock, magnificent views, and the price, while not disclosed, suggests it might be affordable. The three drive up for the weekend to visit the place and negotiate with the owners. Their arrival proves to be disappointing.

The house, which is a 30-room mansion, is in disarray. The once lush landscape is now dead, the exterior is crumbling, and the inside is dusty, ancient, and clearly neglected. But, it has potential and could be a great way to spend a summer vacation. The house is owned by Mrs. Allardyce and her elderly son and daughter. The deal works out to just $900 for the whole summer - a bargain if there ever was one. The only catch is that the Rolfes will be sharing the house with Mrs. Allardyce, a frail, sickly woman that lives in the west wing of the house. Her children explain that she doesn't leave her room and rarely makes an appearance. The Rolfes just need to leave a tray of food for her three times per day. This burden isn't that heavy.

Once the Rolfes settle into the house for the summer, their family ties begin to deteriorate. Marian begins to spend more and more time on the west wing cleaning. Ben begins a descent into madness, peaking as he attempts to drown David in the pool. Marian and Ben's relationship unravels, but oddly, the house begins to come alive with new paint and landscaping. The house is growing as the Rolfes sacrifice their happiness and love. Who's the master and servant? Is the house haunted? Is Mrs. Allardyce even real? These are the questions that arise throughout the book's haunting narrative.

American Nightmares: The Haunted House Formula in American Popular Fiction, by Dale Bailey, compares Burnt Offerings with a later novel, Anne River's Siddon's The House Next Door and of course, the staple of 1970s haunted house fiction, Jay Anson's The Amityville Horror. I've now read all three, and while I still prefer Anson's dark and twisted narrative, Marasco's work is much grimmer and intelligent, dwelling on a biblical emphasis of sacrifice and loyalty. There's a deep social subtext to Marasco's storytelling – the price of happiness, humanity's lust for material things, the financial burdens of average Americans, the limits of sacrifice, and the strains of the family dynamic in modern culture.

The family's descent into despair is a heart-wrenching spectacle for readers, especially considering these characters are so easily likable in the book's opening chapters. The mystery involving the west wing was captivating, leading me to question whether some of the events happening were real or just a malevolent facade. Mrs. Allardyce's identity was like a dangling carrot, suspended for readers to finally uncover in the book's closing pages. The house, a character unto itself, was remarkably detailed to enhance the transformation from ruin to prosperity.

Stephen King, as he acknowledged, probably owes a great deal to Marasco for the success of his 1977 novel The Shining, published just four years after Burnt Offerings. Like Marasco's plot, King replaces the Rolfes with the Torrance family, equally introduced as a strained married couple raising their young son. King transfers the location of a 30-room mansion in upstate New York to the empty Overlook Hotel in Colorado. Ben Rolfe is struggling with a text, like Jack Torrance's frustrated efforts to finish writing a manuscript. Marasco utilizes a deep swimming pool as an eventful place where young David faces death. King uses the mysterious hotel room 217 to captivate Danny Torrance (and a bathtub to be technical). Alternatively, Marian's fascination with the door to Mrs. Allardyce's room is similar to Danny often approaching 217's door. In other words, I hope King cut Marasco a check.

Burnt Offerings is an abstract horror novel, working on a psychological level that is crafted with expertise. As an entry in the overpopulated “haunted dwelling” sub-genre, it is easily in the upper echelon of mandatory reads along with the aforementioned The Amityville Horror, The House Next Door and pioneering efforts like Richard Matheson's Hell House, Shirley Jackson's The Haunting of Hill House, and Henry James' The Turn of the Screw. Unfortunately, Marasco didn't pursue another horror novel that I'm aware of. To quote John Carpenter, “I guess everyone's entitled to one good scare.”