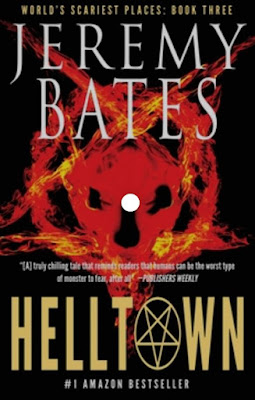 After enjoying horror novels like Suicide Forest, The Mosquito Man, and The Sleep Experiment, I was anxious to read another book by Jeremy Bates. The Canadian-Australian author has two unique series titles – World's Scariest Legends and World's Scariest Places. The idea is that Bates uses some sort of urban legend or supposedly haunted place as the main element of these stand-alone novels. His 2015 novel Helltown is set in the abandoned town of Boston Mills, OH.

The actual urban legends concerning the small town of Boston Mills, OH are pretty darn creepy. The real town, simply called Boston, was closed by the U.S. Forestry Department in 1974. The reasoning was the need to preserve forests in Summit County. The inhabitants were paid to leave and what remains is an abandoned town, complete with old buildings, rural roads, barricaded bridges, and some really wild legends. The white church in town looks to have upside-down crosses on its exterior. There's an abandoned school bus in the forest said to be haunted. Supposedly, a clan of wild cannibals resides in the town and prey on visitors. Toxic gas, disease, and rumors of giant pythons make it sound appealing enough for the occasional tourist to quench their thirst for adventure and mystery. Over the years, Boston is now deemed Helltown.

Bates uses a lot of these myths and legends in his horror narrative. The book is set in 1987 and features Boston Mills as a small community of rednecks that are still living in the town despite the fact that most of the population left 13 years earlier. These rednecks kill rabbits with dynamite, watch a lot of television, drink cases of beer daily, hang out a local bar, and worship Satan. That's right. Satan.

Like a classic 80s horror flick, a group of kids are heading into Boston Mills on Halloween night, hoping to discover ghosts or chainsaw-wielding maniacs. Their car is run off the road by a hearse and the survivors find themselves on the run from crazed rednecks looking for rape, violence, and satanic sacrifice. The book's main characters are two good hearted girls, an ex-Army vet struggling with PTSD, an urban explorer and the whacked-out doctor that's behind the murder and mayhem. Bates uses the church, school bus, rural location, pythons, and crazy cannibal elements of the town's dark mythology to create his nightmarish horror novel.

I think Jeremy Bates has a great thing going. These two series titles are just so much fun and have enough sex, violence, and gore to satisfy fans of Edward Lee and Bryan Smith without going full-blown splatterpunk. Bates' writing is provocative and deeply disturbing, but it isn't unreadable. He has a real talent to skirt the boundaries of absolute madness without pushing the reader over the edge. Recommended.