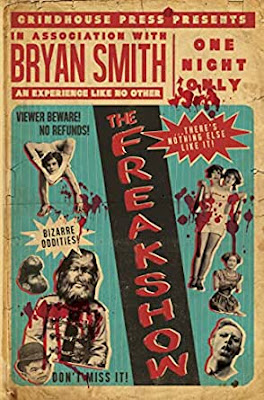 According to his Goodreads profile, Bryan Smith has authored more than thirty horror and crime novels and novellas. His crime-fiction book 68 Kill was adapted into a critically-acclaimed film in 2017. Smith also co-scripted an original Harley Quinn (Batman) story for DC Comics' House of Horrors anthology. I first discovered the author in the mid-2000s by reading his mass-market horror paperbacks like House of Blood and Deathbringer. His 2007 horror novel The Freakshow was originally published by Leisure and has now been reprinted by Grindhouse Press in multiple formats.

The Freakshow is splatterpunk with the obligatory copious amounts of sex (mostly rape), gore, and violence prevalent over the science-fiction and dark fantasy elements. The novel's concept is that supernatural beings from a netherworld are playing a game where they control humans to do just about anything imaginable. These “things” are losing their home world, so they want ours. By conquering humans through assimilation, they can move from the netherworld into ours.

These beings are sort of like Clive Barker's Cenobites from his novella The Hellbound Heart and the franchise of films. They have a variety of appearances and abilities and aren't necessarily good or evil, thus the “angels to some, demons to others” sentiment of Barker's stories is the theme of The Freakshow. Because of the variation, Smith's imagination runs wild. There's a two-headed succubus leader, a robotic clown, sexually depraved humans (if you can call them that), rolling heads that chomp flesh, you get the general consensus.

It's hard to find any characters to really cheer other than Heather, a young woman in an abusive relationship with her boyfriend and dealing with an ailing mother. She is the main character, but that's a loose term considering the book has a dozen or more characters. Mostly these characters are disposable and make for rape and torture targets. The story presents characters that are fighting the freakshow invaders or working for these supernatural beings. Mostly, the characters just dwell on perverse sex and creative ways to kill or maim each other. There's no respect for any higher authority beyond their own self-interest

Overall, I found the book to be slightly better than average. With Smith's literary work, I manage my expectations, knowing that his narratives are saturated in over-the-top violence and gore. There's nothing wrong with that, but I normally like my horror to be more psychological than physical. If a unique, violent bloodbath is your thing, then The Freakshow will surely please you.

Note – Brian Keene's Urban Gothic and this book tie-in to a novel called Suburban Gothic, authored by both Keene and Smith.