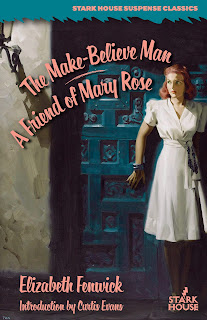 Elizabeth Jane Phillips (1916-1996) authored nearly 20 stand-alone novels over the course of thirty years. Often, she adopted the pseudonym E.P. Fenwick or used Elizabeth Fenwick to write her crime-fiction and suspense books, Her 1963 suspense novel The Make-Believe Man was nominated for an Edgar Award by The Mystery Writers of America. It was originally published in hardcover by Harper & Row, then published again by Avon in a paperback edition. Thankfully, Stark House Press has recently reprinted some of Fenwick's novels including The Make-Believe Man. It is in a 2022 twofer with the author's A Friend of Mary Rose (1961) and a wonderful, informative introduction by Curtis Evans.

Norma is a single mother and widow living temporarily in Detroit with her mother, Ms. Moore. In the book's opening pages, Ms. Moore, is leaving town for a few days to visit Norma's brother. She provides adequate instructions on what to do in her absence and the conversation brings up a former tenant that Ms. Moore once had at the house. His name was Cliff and he was a fine renter that was asked to leave to make room for Norma and her son Jimmy months ago. 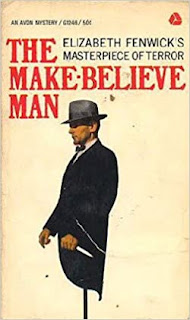 In Ms. Moore's absence, Norma is enjoying the house and her clerical job at work. Jimmy is fond of the elderly neighbors and often goes there after school. But, one night Cliff shows up at Norma's front door asking to come inside. Cliff is really peculiar, has a black eye, and explains to Norma that he just needs a few days to rest and then he'll be moving on to another town and job. Norma says no and is genuinely creeped out by Cliff's odd behavior. Cliff finally leaves, but when Norma checks the mantle, the extra key to the home's front door is now missing.

Norma has the locks changed, but the suspense begins to build as Cliff makes a stop at Norma's work to ask about her whereabouts. Then, he calls her on the phone and suggests that Ms. Moore is really his mother too. But, she isn't, he's just psychotic. He becomes a raging lunatic when he learns his key no longer opens the front door. From there, The Make-Believe Man transcends into some really scary happenings.

According to my research, Fenwick really loved these “domestic menace” types of stories and it is clear she perfected it based on the quality of The Make-Believe Man. Cliff is a scary individual, made downright terrifying when readers learn about his turbulent past. I enjoyed Norma's strength, not only as a mother, but as a widow and fighter. There's a sense of intrigue when a detective begins an investigation to find Cliff. Fenwick also sprinkles in an admirable character named Benning as Norma's potential love interest and co-worker. The three characters collaborate well and I enjoyed the police procedural styling of the book's second half.

Overall, there's nothing to dislike about Fenwick's writing style or this book. Stark House Press has made a wise choice in reprinting this lost classic. It's a tightrope of suspense, scares, and action that culminates in a harrowing, unforgettable ending. In other words, you should read it right now.