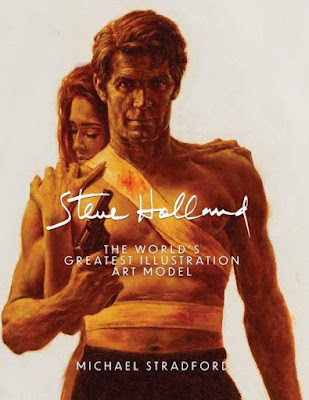 On the Paperback Warrior Podcast, and on this very blog, I've often reminisced about my early childhood and my father's love of 20th century paperbacks. I can still remember summer days walking up our creaky staircase, hoping to discover something new or exciting about my humble, and often very quiet, father. In an unfinished guest bedroom, there were leaning stacks of welding manuals and plastic bins of old bolts. There were also stacks of boxes spilling over with western paperbacks. Occasionally, I would read one just to break up the monotony of Stephen King and Dean Koontz, but sifting through the books was the real pleasure for me at that age. Thumbing through the stacks, I began to think the vivid gun-slinging character depicted on the covers was actually the same hero, but was just calling himself Buchanan, Nevada Jim or some other tough-as-nails sounding name to fit the book. It wasn't until many years later that I discovered it was the same hero, only his real name was Steve Holland.

In a new coffee-table book called Steve Holland: The World's Greatest Illustration Art Model, author Michael Stradford reveals that he had a similar experience in the 1960s when he discovered Doc Savage in a Cleveland book store. In this visual and informative book, Stradford delves into the life and career of Holland, the most iconic male model of 20th century literature. My softcover version weighs in at over 200 pages and features hundreds of paperback covers, exclusive photos, and larger than life paintings that honor the man that launched a thousand paperbacks.

The book's introduction is written by Jason Savas, a friend of mine that inherited Holland's crown in the 1980s. Savas, a former model employed by the esteemed Wilhelmina Model Agency, has been featured on a 1,000 book covers himself. Savas details his experiences in the industry working with Holland, a man he deemed “the consummate pro.” Stradford includes a biography of Savas, featuring a handful of stirring, action-adventure book cover scans as well as the beautiful Steve Assel painting The Iron Marshall (Louis L'Amour) that Savas posed for.

Stradford's layout is divided into sections dedicated to various eras of Holland's career. For example, numerous pages detailing his paperback career are divided into genres like action, adventure, romance, western, sci-fi, etc. There is a complete section focusing on just the men's adventure magazine paintings, the Doc Savage era, and various advertisements featuring Holland's face or likeness. There is a biography on Holland, and a detailed interview with Holland's daughter Nicole and third wife Jean. Also, author Will Murray's expanded interview with Holland from Starlog is expanded and exclusively included. Murray has been the primary contributor to the Doc Savage series for decades.

I really enjoyed artists Bob Larkin (Conan, Iron Fist, Hulk) and Bob Caras (The Avenger) discussing their experiences painting Holland. There are so many amazing artists and photographers interviewed for the book, including Alex Ross, Frank Reilly, Joe DeVito, Robert Osonitsch, and Jack Faragasso. It was personally rewarding to learn how humble and kind Holland was as described by his peers, friends and family. I never needed validity, but the real life Holland seemed to parallel the admirable, heroic characters he became on canvas.

Steve Hollad: The World's Greatest Illustration Art Model is absolutely a mandatory reference for anyone fascinated by 20th century paperbacks, magazines and male-oriented advertisements. I was enthralled for days just researching the paperbacks and building my shopping list based on these incredibly vivid covers. More than 20 years after his death, Holland's face is still selling publications. That is a testament to his phenomenal physique, likable face and ability to provide the perfect likeness for all of these amazing visuals. Stradford has honored Holland in such a beautiful way and I can't thank him enough for his labors in creating it.