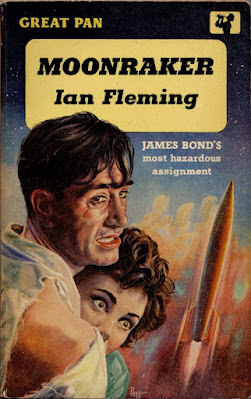 James Bond's third series installment, Moonraker, was first published in the U.K. as a hardcover by Cape on April 5, 1955. Macmillan published the U.S. edition on September 20, 1955, followed by Pan Books publishing a paperback edition in the U.K. a month later. In December of 1955, Permabooks published a paperback version in the U.S. under the title Too Hot to Handle. In 1979, the book's title was used for the eleventh James Bond film and the fourth appearance of Roger Moore as the Secret Service hero and heartthrob. The film's production company, Eon Productions, authorized Christopher Wood to write a novelization of the film, which was published under the title James Bond and Moonraker (a bestseller that I've heard is quite terrible).

In Moonraker, Fleming begins by providing a more intimate look at Bond's day-to-day activities. Readers gain a peek into his home, his routines, and his official desk assignments when he isn't globetrotting to extinguish international fires. It's shown that Bond is having affairs with three married women, works a desk schedule of 10 to 6, and likes to play cards in the evenings with friends.

Fleming reveals that Bond uses a stimulant known as Benzedrine to stay awake and alert, and even combines the amphetamine with champagne. It was also,interesting to watch his habit of sprinkling black pepper on the surface of vodka.

It is all of these things that further connected me to the character. I also found it fascinating that Bond was contemplating how many more assignments he has to complete before he can retire. He even fathoms how many will introduce the real possibility of his own death. It was written in such a poignant way that made me sympathize with him. Personally, I felt that his characteristics from Casino Royale were further enhanced by this novel. The idea that he wants to move on and have a normal existence is re-visited at the beginning and ending of Moonraker, leaving an emotional impact on readers.

Down to business, M approaches Bond about a personal favor, sort of an “off the record” assignment. He wants Bond to join him at an exclusive gentleman's club called Blades to play poker with a wealthy entrepreneur named Hugo Drax. M suspects Drax is cheating, but wants Bond to discover his method. This segment of the novel includes intense rounds of bridge as Bond verifies Drax's cheating and beats him with a stacked deck of cards, winning seven times his annual salary. All of this is important because the narrative focuses on Bond and Drax's working relationship later.

Bond's official assignment comes to fruition when a Ministry of Supply security officer is fatally shot in a facility housing England's first nuclear missile. This missile has been created by Drax's company and is to take flight as a demo version for England and foreign powers. Bond is assigned as the security officer's replacement in an effort to determine what's going on. I found his investigation hard-boiled and edgy, culminating in a high-speed chase between Bond and Drax's crew from the town of Deal to London. Of course, it wouldn't be a Bond novel without the inclusion of a beautiful co-worker named Brand.

Moonraker is rather unique due to its settings. The entire novel takes place in and around London, with a focus on atmosphere as Bond is centralized on the sprawling White Cliffs of Dover, the countryside, and the battering of the North Sea and the English Channel. There's a sense of isolation as Bond gazes at the ocean at night, listening for the ship's foghorns and spotting a beacon. I felt that this, combined with Bond's lonely position in the book's last pages, added a sense of solitude to the story.

Drax's backstory of his rise to criminality, war atrocities, and his fevered attempts to destroy London paired nicely with Bond's “do or die” mission. There's violence, sexiness, thrills, car chases, shootouts, and the pesky Russians to keep the pages moving at a brisk pace. The storytelling improved drastically from the rather average prior installment, Live and Let Die. While that book was action-packed, it came  across a bit campy when compared to the series debut in Casino Royale. Ian Fleming is all business in Moonraker, making it a fan favorite among James Bond fans. Recommended!