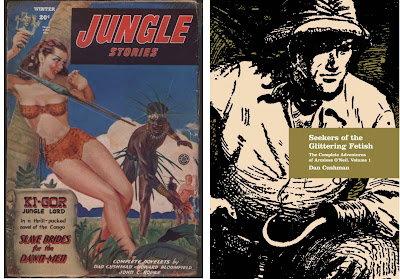 Armless O’Neil is a hardboiled adventurer who starred in 12 pulp novellas by Dan Cushman (1909-2001) between 1945 and 1953. The stories have been compiled into two collections by Steeger Books including the first adventure, “Seekers of the Glittering Fetish” - originally from Jungle Stories Magazine.

Armless O’Neil isn’t exactly armless. He does have a steel hook projecting from the left sleeve of his jacket in place of an arm, but the right hand seems to be intact. He’s described as being ugly, but an “Irish ugliness which a person would enjoy looking upon.”

The story takes place in the port city of Brazzaville, what is now known as the Republic of Congo, back when it was a French colony — a combination of Wikipedia and Google Maps are good supplements to a Dan Cushman story. We join Armless in a seedy tavern where he’s meeting an acquaintance named Swede to discuss some rare blue diamonds.

It quickly becomes clear that the Swede won’t show at the meeting because he was double-crossed and murdered by his business partner, the Dutchman. Armless has zero interest in doing business with the Dutchman because of his practice of flaying the skin off African natives.

Recovering the cache of missing diamonds is the focus of this story. Armless has a sidekick named Tommy who falls in love with a girl along the way in a nice subplot. Cushman writes shockingly violent fight scenes — among the best I can recall in pulp fiction. Having a sharpened hook for a hand sure helps.

Armless is a gruff and charmless character, but you’ll find yourself rooting for him nonetheless.

If you’re sensitive to antiquated African stereotypes, you may want to skip this one as the natives are all of the ooga-booga variety. But if you enjoy old-fashioned hardboiled treasure hunt stories, you’re bound to enjoy this one.