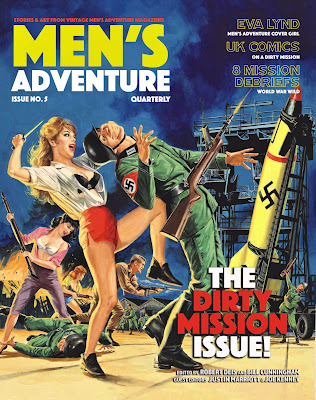 I can remember watching all of the old war films on TBS as a kid. My father had them on and I always camped out on the living floor to watch all of the action. I can remember repeated watches of The Dirty Dozen, The Wild Geese, Attack Force Z, and Devil's Brigade. Heck, my parents just celebrated their 50th wedding anniversary and “their song” is Mike Curb Congregation's “Burning Bridges”, the closing credits theme music of Kelly's Heroes. Needless to say, the team-based, do-or-die missions was ingrained into my childhood.

I was happy to learn that Bob Deis and Bill Cunningham's fifth issue of Men's Adventure Quarterly (MAQ) was dedicated to the team-combat “Dirty Mission” sub-genre of military-fiction and men's action-adventure.

In the issue's opening pages, Deis traces the history of the concept, citing the 1965 novel and 1967 movie The Dirty Dozen as a possible catalyst for the numerous stories that appeared in men's adventure magazines. As Deis illustrates, the story that inspired The Dirty Dozen, “The Filthy Thirteen”, was published in 1944 in True: The Man's Magazine. Deis's opener is punctuated by glorious vintage artwork by Frank McCarthy, Norm Eastman, and popular Spanish comic book artist Vincent Sagrelles.

The magazine's opening pages also features a short article by Bill Cunningham. He spotlights various films that featured unusual, unfortunate heroes partaking in dangerous military missions. Kudos to Cunningham for including one of my favorites, Uncommon Valor.

Paperback Warrior is a big fan of Justin Marriott's magazines focusing on vintage books, pulps, comics, and more. One of his most recent projects is a series of fanzines dedicated to the British war comics and comic strips of the mid to late 20th century, Battling Britons. Using simple terms, he explains that the bigger British comic companies were Fleetway IPC and DC Thomson. These are like the Marvel and DC companies in the U.S. One of the things I found most interesting is that British monthly publications featured “pocketbooks”, 64-page stories that were sometimes written by military veterans. This provided a sense of realism and technical detail. Marriott's article is laced with spectacular comic panels from the likes of Battle Picture Weekly and Warlord as well as covers of Commando.

The bulk of MAQ5 is dedicated to Eva Lynd, an iconic model that posed for MAM artists like Al Rossi, James Bama, and Samson Pollen. One of her most popular pairings was with artist Norm Eastman, which is a working relationship that Deis expands upon. There are numerous art panels and magazine covers to feast your eyes upon, including several that feature both Lynd and iconic male model/actor Steve Holland. In addition, Deis also briefly covers Lynd's work with artist Al Rossi, which was something I honed in on as a paperback fan. Book covers include Orrie Hitt's Women's Ward, Don Bartell's Strange Lovers, and one of the best books I read in 2022, Nude in the Sand, by John Burton Thompson. I really enjoyed the inclusion of fake movie posters portraying Lynd and Holland in action-packed military yarns. These are “fan” movie posters created by Vance Capley and David Goode, originally featured on a now defunct blog called Goode Stuff. Personally, I'm dying to see Fortress of the Damned. But, one can only dream of a film matching the power and vivid imagery of the faux poster.

Glorious Trash blog superstar Joe Kenney offers up a unique insight into his childhood. Kenney explains how he was submerged into the men's action-adventure genre, specifically MAMs and how they spawned his undying love for late 20th century paperbacks. I enjoy Kenney's blog and it was interesting to learn more about his life and what brought him to this wild dance.

I seem to say the exact same thing after reading each new issue of MAQ: This is their best issue! I don't know where Cunningham and Deis find the time, energy, and dedication for all of these vintage magazines, artwork, reference material, books, the MAM CULTURE, to be featured in such a classy, professional way. This duo has side-projects, blogs, their own enjoyment, and families to tend to on top of what appears to be a full-time job creating these MAQ volumes. My hat remains tipped to their labors of love. MAQ #5 is...well Hell, it's their best issue yet!