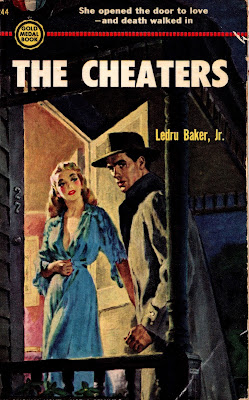 Ledru S. Baker Jr. served in the U.S. Army Air Corps during WW2. In 1951, his short literary career began with the bestselling Fawcett Gold Medal paperback And By My Love. He followed with three more novels before his death in 1967. Cutting Edge Books has released nearly all of Baker's works, including The Cheaters, originally published by Fawcett Gold Medal in 1952. The book is available in both digital and physical editions as a stand-alone or as part of the Ledru Baker Jr Reader, an omnibus also containing Brute Madness and And Be My Love.

Orchestra musician and bandleader Jack Griffith works at a posh Hollywood night club that is controlled by the Syndicate, specifically a Mafioso named Moss Morrison. One evening, Griffith is summoned to a meeting with Morrison and offered a peculiar proposal. Morrison wants to divorce his wife, a hot ticket named Mardi, but needs something on her to avoid a huge payout in alimony. Sensing his wife's attraction to Jack, Morrison offers Jack a large sum of money if he can swindle Mardi into a romantic fling. Griffith accepts the deal, but after meeting Mardi he falls in love with her.

Just when you think Baker's smooth prose is surely leading into the overused “innocent man on the run” formula, the talented author switches the narrative entirely. Instead, Griffith figures out the whole setup while falling in love with a clever and sexy waitress. When she's taken captive by the Mob, Griffith recalls his WW2 days of fighting the Italians in brutal, bloody combat. With an iron-fisted vengeance, Griffith takes the fight to the Mob.

Baker's writing is exceptional and injects a heavy dose of realism and violence for a 1952 novel. The Cheaters mixes the grit and grime of Donald Hamilton (Matt Helm) with the sarcastic afterglow of Mickey Spillane (Mike Hammer). Baker's writing is just so engaging and produces a strong, emotional reaction. An example:

They looked up, and their startled faces gave me all the time I needed. I shot the first one through the head; his skull and hair rose magically. I snarled and turned to the other one as the noise and blast of the gun, the smell in the room and the power I received from the recoil took me away from Los Angeles and threw me back to the Po Valley.

I swung the gun toward the other one. He had risen, and his hand was pawing inside the coat when I said: “Hell's waitin'! Good-by!” at the same instant that I fired.

The first shot threw him back into the chair. The second one caught him in his throat and ripped out the back of his head. I guess it did, because there were little pieces of bone on the window like flys trapped on flypaper.

If you have a penchant for strong, “fight or die” heroes forced into inevitable violence, then The Cheaters will surely hit you like a ton of bricks. This is uncompromising, unwavering crime-fiction.