Conan - Blood of the Serpent 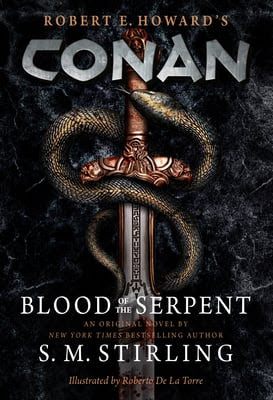 S.M. Stirling (Stephen Michael Stirling, b. 1953) is a Canadian-American science-fiction and fantasy author. His literary work includes the Draka, Fifth Millennium, Shadowspawn, and Emberverse series titles. He also co-authored The General series with David Drake and teamed with Jerry Pournelle for two Falkenberg's Legion books. My first experience with Stirling is his recent Conan novel, Blood of the Serpent, published by Titan Books in 2022. It is the first official Conan novel since 2011's novelization of Conan the Barbarian.

Blood of the Serpent takes place after the events in Conan the Buccaneer and before the novella “Red Nails". Conan, in his late 30s, has joined up with the Free Companions working for the leader, Zarallo. In the book's opening pages, Conan is in a bar in the southwestern portion of Stygia. It's here that he first sets eyes on Valeria, a female privateer in the Red Brotherhood. After Conan saves a gambling man's life, Valeria herself runs afoul of a reckless Stygian commander. In quick fashion, Valeria wins the fight and embarrasses the leader.

The book's first adventure has Conan, Valeria and other mercenaries guiding a Stygian shipment of supplies and slaves to one of their massive mines. In an odd twist, Conan and Valeria must protect the Stygians when the slaves revolt, kill off their masters and run the mercenaries off. Conan admits that if he were enslaved, he would have done the same. With the slave uprising, the Stygian command is fragmented, making a perfect getaway for Conan and Valeria to conduct a gold heist. After some fights with crocodiles and other reptiles and animals, the gold heist doesn't quite work out. But, this sets up the next part of the narrative when Valeria is forced to kill the Stygian commander she skirmished with earlier. She then flees on her own, but Conan learns that the commander's brother is going to trail her, hoping for a vengeful surprise kill away from prying eyes and allies.

The second half of the novel has Conan battling Abomean warriors deep in the jungle. He makes love to a native, frees her people, and then aligns with the Abomeans. There's also battles with apelike creatures that were right out of an Edgar Rice Burroughs novel, but I received vibes that closely compared with that of Thak, the ape-man creatures that Conan fought in “Rogues in the House”. There were some odd moments with Conan and the native girl swinging on vines through the jungle, but eventually the book pairs right up to the opening paragraphs of “Red Nails” with Conan finding Valeria.

Many have compared this novel to the Robert Jordan (James Oliver Rigney Jr.) Conan books, and that might be a fair comparison. But, Stirling is rougher around the edges, incorporating lots of gore and ultra-violence. He's far from Robert E. Howard (isn't everybody?), but still can tell a quality story that has the overall feel of Conan. I would have preferred the titular hero to do less talking, have a little more bravado compared to Valeria, and be more authoritative. I don't believe de Camp, Howard, or Carter's versions of Conan would have a return of the gold, but instead would have involved some way for the hero to lose it in a self-serving, selfish attempt to get rich quick.

I enjoyed Stirling's flashbacks to classic Conan adventures from the past. Conan recounts events from “Rogues in the House” and “Tower of the Elephant”, and I also really liked the purposeful continuity right into Howard's “Red Nails” novella. It is seamless, and maintains the same pace and formula that made that story so outstanding. As a bonus, the book even has “Red Nails” at the end to preserve one long story. If you bought the hardcover, there are also illustrations by Roberto De La Torre included. If you wanted to finish this particular portion of Conan's life, Roland Green's Conan and the Gods of the Mountain completes this story arc and dismisses Valeria's future participation.