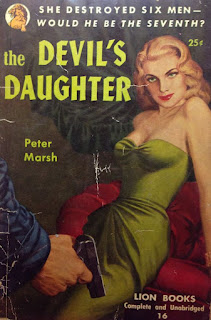 We really have gained some mileage out of Stark House Press's Lion Trio 3. This recently released omnibus features new editions of three rare, long out of print Lion paperbacks. We covered Sin Pit (Lion Book #198, 1954) by Paul Meskil HERE and HERE. Also, we covered Dark the Summer Dies (Lion Book #138, 1953) by Walter Untermeyer Jr. HERE. This review is for the third and final book in the collection, The Devil's Daughter. It was authored by Peter Marsh, a pseudonym for Alan Williams (1890-1945), and published as Lion Book #16, 1949. The omnibus is prefaced with an insightful article by Paperback Parade's Gary Lovisi detailing the history of these novels and reasons that they remain classics of dark crime-noir.

The Devil's Daughter is a unique book, told in a conversational way between two people, Michael Perry and Laura. This storytelling style isn't something new, most recently having been used by Stephen King for the Hard Case Crime novel Colorado Kid (2005). Generally speaking, one would think reading a conversation shouldn't be an edge of the seat thrill-ride. However, if done well, the characters in the present day – the mood, emotions, character development – should progress to match the dark history, suspense, excitability of the past events they are presenting. In that regard, Williams is an absolute scholar and creates two dynamics, the mysteries unfolding in the past through this conversation and also the two characters adapting to each other's account as they slowly begin to change emotionally. It's a superb reading experience. 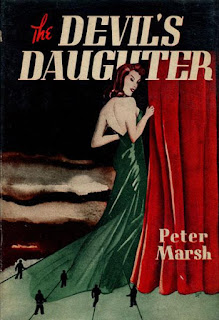 Michael Perry runs a nightclub and resides in a posh apartment above it. He's a corrupt character that routinely uses cameras to spy on the women's restroom and microphones to listen to patron's conversations at the bar and nearby tables. While the reader can speculate that Michael is into a lot of bad stuff, on paper he is mainly just a drug dealing pervert. Laura, a stunning beauty, catches his eye and eventually he invites her upstairs to his apartment. It's here that Laura discovers mirrors on the ceiling, different types of cigarettes for drug “moods”, and the not so discreet cameras and microphones. Michael, wrought with desire for Laura, confesses he likes to have a good time.

Before Laura agrees to fool around, she wants Michael to hear a story. Taking the bait, Michael agrees and this is how the reader is submerged into both characters' histories. Through the course of the conversation, Michael realizes he does know Laura, and that she was a part of his shady criminal past. When Laura explains that she has systematically seduced and murdered many of Michael's former allies, the novel takes a bleak, but enjoyable, turn into some really violent events. It is a race to the end as the body count stacks (in Laura's tale). Will Michael suffer the same fate? 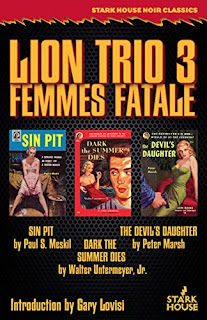 The Devil's Daughter is a unique book for all of the storytelling techniques I've alluded to already. However, as a reading experience, the author pulls no punches. There are a lot of elements in this novel that are somewhat uncommon for 1949. The time-period was a pivotal point in crime-fiction. The 1940s was the birth of the paperback original, but also as the decade came to a close, Mickey Spillane's 1947 smash hit I, the Jury really pushed the boundaries of what writers could say and do within the context of their story.

Williams injects the gritty, violent determination of prohibition era bootleggers and the extreme nature of their business practices smoothly into the book's narrative. It is punctuated by a captivating, unforgettable scene that is written in a tremendously violent way. It's nearly an unprecedented chapter that wasn't typical of a consumer “everyday” paperback. This culmination into ruthless aggression was an obligatory portion of the plot's development, another staple that binds these characters together in a turbulent way.

If you enjoy clever, well-written novels that stray from the path of least resistance, then The Devil's Daughter will certainly be an entertaining, worthwhile investment. Combining this novel into a collection with the exceptional Sin Pit makes the price of admission an easy expenditure. Stark House Press has outdone themselves again.