Conan - Wolves Beyond the Border 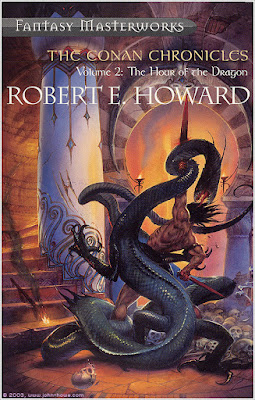 I questioned whether to place “Wolves Beyond the Border” in the Conan category. Technically, it's in the same fictional universe and mentions the hero, but Conan doesn't actually appear in the story. Yet, it first appeared in the 1967 Lancer paperback Conan the Usurper, alongside other Conan classics like “The Scarlet Citadel” and “The Phoenix on the Sword”. By association alone, it seems mandatory. In fact, Howard began the story in the 1930s, but it went unfinished and unpublished. It was located in 1965 by Glenn Lord and then passed to L. Sprague de Camp to finish writing the story based on Howard's notes and summaries.

“Wolves Beyond the Border” takes place along the Pictish border. For Hyborian Age rookies, the Picts are similar to the Native American tribes of the North American continent in the 1500-1800s. If you read early frontier novels by the likes of James Fenimore Cooper (Leatherstocking Tales) or later, traditional westerns by Zane Grey (his Border Trilogy for example), the narratives mostly consist of early settlers and pioneers struggling to live in the same territorial regions as Native American tribes. So, Robert E. Howard used this as a blueprint when creating Conan stories like “The Treasure of Tranicos” and “Wolves Beyond the Border”. The Pictish borders are similar to the surrounding areas of North America's early Ohio River Valley.

This story is told in first-person narrative by a border ranger. In the early pages, this ranger (unnamed and referred to as Gault Hagar's son) witnesses a bizarre ritual by the Picts, where they torture a man and then magically place him in the body of a snake. It is a disturbing, horrific passage that surpasses even the mad-scientist terrors lurking in “The Scarlet Citadel”. This ranger sees that an Aquilonian named Lord Valerian is conspiring to secretly ally with the Picts. This is important because the story is set during a time when Conan was attempting to overthrow Aquilonia's leaders and become the new king. An alliance of Picts and Aquilonian noblemen doesn't promise success for Conan.

At nearly 60 paperback pages, the story becomes bogged down and convoluted in the middle. The ranger hero confronts Lord Valerian and Pictish leaders at a swamp cabin and there's a fight and a capture. The beginning and end are exciting skirmishes and chase sequences, but overall I found the story to be of middling quality. From what I understand, Howard wrote the story up to the cabin meeting, and then the reigns were handed to de Camp to complete the manuscript from there.

In the big picture of the Conan mythos, “Wolves Beyond the Border” is like the Star Wars film Rogue One. It is a separate story without the major heroes like Skywalker and Solo, but adds to the trilogy that began with Star Wars. Same principle here. While Conan isn't around, this is a behind-the-scenes political/military strategy that contributes to the events leading to Conan capturing the Aqulonian throne. If that's your type of story or if you are a Conan collector, then I'm sure there is plenty of enjoyment to be found here. Otherwise, skip it.