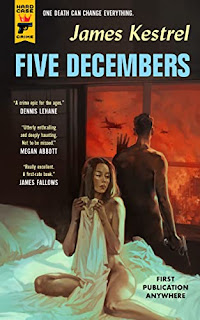 The 2022 Edgar Award for Best Novel went to our friends over at Hard Case Crime for an original work called Five Decembers. The author is a successful contemporary novelist named Jonathan Moore using the pseudonym James Kestrel.

It’s Thanksgiving, 1941 and Honolulu Police Homicide Detective Joe McGrady has no idea that Japanese planes will soon be headed his way to bomb Pearl Harbor and change the world forever. McGrady spent some time in the U.S. Army before becoming a patrolman in Honolulu. Four years later, he’s a new detective who just caught his first murder case.

And what a case it is! A young man and woman are found slaughtered in a dairy farm shed on Oahu’s windward side in a bloodbath not for weak stomachs. The dairy farmer is politically-connected and one of the victims has ties to local Navy brass. McGrady is under a ton of scrutiny from his bosses, and he’s feeling the pressure to solve this thing quickly and with minimal fanfare in the news.

The author’s writing mimics the style of James Ellroy in his Los Angeles Quartet/American Tabloid period - a hardboiled cop doing his best to solve a murder case in the shadow of world-changing events — namely World War 2.

It’s a pretty standard hardboiled police procedural with international implications that receives a giant boost of storytelling nitro when the Pearl Harbor attack occurs and the war with Japan commences. At that point, this good book becomes a great one.

The fictional events that transpire during the war and thereafter were among the most creative and unexpected plots that I’ve ever read in crime-fiction. You want heartbreak and romance? It’s there. You want bone-crunching hardboiled violence? You got it. You want a clever espionage thriller? Here you go.

Don’t let anyone spoil this novel for you. It’s not just the Best Mystery Novel of 2022, it’s the finest book I’ve read in 20 years. Essential reading for paperback genre fiction fans. Highest recommendation.