Conan - The Curse of the Monolith 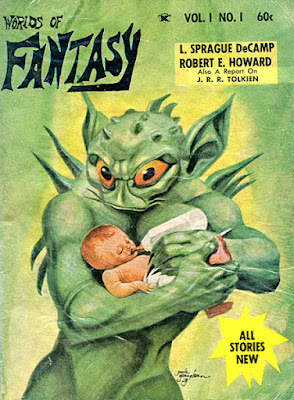 Worlds of Fantasy magazine featured “Conan and the Cenotaph” in their first published issue in 1968. The story was authored by Lin Carter and L. Sprague de Camp and was later featured in the 1969 Lancer paperback Conan of Cimmeria under the title “The Curse of the Monolith”. It was also featured in the 1971 anthology Warlocks and Warriors as well as Sphere Books' 1989 collection The Conan Chronicles. The story was later adapted into comic form in Savage Sword of Conan #33.

The story takes place right after “The City of Skulls” and finds the titular hero serving as a captain to King Yildiz of Turan. He's assigned the duty of delivering a letter to King Shu of Kusan, a minor kingdom in Khitai far to the East (and almost off the map). The letter is to encourage an alliance between Turan and Kusan, an alliance that Shu happily agrees to. Upon meeting Conan, he sends his agreement in the way of a letter to be carried back to King Yildiz. He also sends Duke Feng, a guide and escort to accompany Conan back to the western border of Kusan. Feng has two servants and avoids any sort of manual labor, a trait that Conan fiercely despises. But, when Feng offers Conan a treasure, his interest and possible kinship is peaked.

Feng explains to Conan that he knows where a large treasure is held at the top of a mountain nearby. He encourages Conan to suit up in armor and to accompany him to a black monolith of stone to acquire the treasure. Why does he need Conan? Apparently there are savages nearby that could attack Feng while he is dealing with the treasure grab. With Conan by his side, watching his back, the treasure can be gained and split. Conan agrees and the two go to the monolith.

Once they arrive, Conan feels a strong magnetic force and is shocked to find that he is nothing more than a fridge magnet. With the armor on, Conan is thrust to the monolith due to the magnetism possessed in the stones of the mountain. Feng explains to Conan why he has trapped him here. Further, a jellylike monster guards the monolith and drops flesh-eating acid on its prey. With Conan trapped by Feng and facing a torturous death by the equivalent of The Blob, he must use his strength to break the power of magnetism.

"The Curse of the Monolith" weighs in at just 20 pages and is an average story at best. There's nothing to overly dislike about the plot other than its simplistic premise. Carter and de Camp's description of the mountains and monster was vivid and provided just enough atmospheric touch to place the readers into the story. However, this was just another short Conan adventure that was rich with descriptive details but not particularly memorable. This isn't a necessary read.