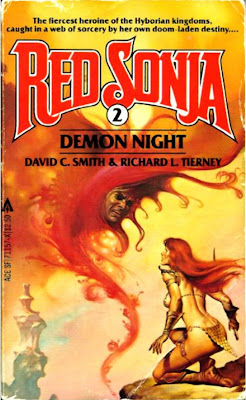 Created by Roy Thomas Jr. and Barry Windsor Smith, Red Sonja made her debut in Conan the Barbarian #23 in 1973. The fiery red-headed barbarian was placed in Robert E. Howard's Hyborian Kingdom as a companion to Conan, but she flourished as a lone hero in comics, magazines, graphic novels, and other pop-culture. She also appeared in a six-book series of Ace paperbacks in the 1980s. I read and enjoyed the series debut, 1981's The Ring of Ikribu, and was gifted four more of the paperbacks by my wife as an anniversary present. I celebrated by reading the series second installment, Demon Night, published in 1982.

Red Sonja is in Eastern Zamora when she awakens to find she is the prime suspect in the assassination of Captain Voss. In reality, Lieutenant Keldum killed Voss to gain one more rung of power, setting up the strange flame-haired warrior as the fall girl. Escaping the posse, Sonja journeys into the desert and rides upon a mysterious city called Elkad. Outlining the city's gateway are the bodies of six women, clearly tortured, mutilated, and very dead.

Sonja is welcomed into the city and learns that the Elkad are a primitive people that sacrifice virgins to an ancient alien race called the Earth-Folk. Learning of this sort of nonsense, Sonja quickly leaves (in a roundabout way) and heads into the nearby mountains to find a magician that has some control over the Earth-Folk. Aside from a few events, this is really where Sonja's portion of the story leaves off.

I enjoyed the book, but my complaint would be that it was really about a young virgin named Tiamu, an Elkad servant. When Keldum and his henchmen pursue Sonja to Elkad, they enter the city and begin throwing around their weight. Tiamu is fearful that she may be the next sacrifice to the Earth-Folk (a horrible way to die), but is raped by Keldum's rival, and second-in-command. In a sequence of events that mirrors Sonja's origin (raped and then supernaturally gifted), Tiamu begins a reign of terror on Elkad and the invading military. We're talking Carrie at the prom sort of terror. She also has a love interest with a magician's apprentice.

Demon Night is a weird book that incorporates a lot of sorcery and fantasy elements. I'm not a fan of magic, preferring sheer, sharp-edged violence to battle the monsters and dastardly villains of the Hyborian Kingdom instead. I kept picturing the Earth-Folk aliens, buried in their mountain hideaway, as an L. Ron Hubbard creation right out of Scientology 101. Not my thing, but it didn't detract from the narrative. The authors meander a bit here and there, but overall it's a satisfactory adventure tale worth the investment and exploration. Recommended.