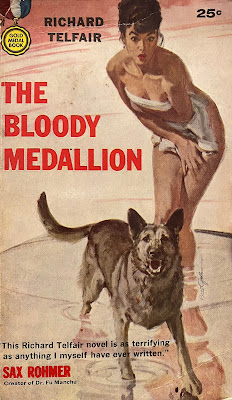 According to Spy Guys and Gals, Richard Telfair was a pseudonym used by Richard Jessup (1925-1982). Jessup authored westerns, pulp stories, and espionage, but was mostly known for his novel The Cincinnati Kid, which was adapted to film starring Steve McQueen and Edward G. Robinson. My first experience with Jessup is The Bloody Medallion. It was the first of five spy-fiction novels starring Montgomery Nash, a U.S. operative working for the Department of Counter Intelligence. The Bloody Medallion was originally published in 1959 by Fawcett Gold Medal and has since been reprinted in both digital and paperback versions.

It is explained to readers that Nash works in the European section of the DCI and has a background as an attorney and WW2 veteran. This European section is made up of two-man teams that blanket the continent taking the war to the people who would make war with the US. His partner is a guy named Paul Austin. In the early pages, Nash receives a cryptic phone call from Austin with map coordinates and an odd message. Later, the DCI pulls Nash in and explains to him that Austin has changed sides and defected to the Soviet Union. As Nash digests this shocking news, he discovers that the agency has targeted him as a possible collaborator in Austin's defection. Grabbing a gun and a hostage, Nash escapes the agency to clear his name while also attempting to learn more about Austin's betrayal.

Nash tracks Austin's last known whereabouts to a mistress named Helga. With her, Nash learns of a secret society that fought the Nazis in Poland with the help of the Russian army. Each member of the society wears a special medallion that contains a piece of cloth that was dipped in the blood of their fallen comrades in a fateful battle. This secret society now fights international enemies of Russia, with America and other European allies being their chief targets. Just like Austin, Nash falls for Helga and decides to infiltrate the society to learn more about Austin's fate. Jessup's narrative is captivating as Nash learns the society's secrets while also agreeing to assist them in a plot to destroy a drug czar. But, to accomplish the mission he needs to dodge the DCI hitmen and place trust in Helga, a woman who holds a number of valuable secrets.

I really enjoyed my first experience with Monty Nash. He writes in a hard-boiled, pulpy way which is unusual considering this is a spy-fiction novel. Nash is extremely violent, and I was left awe-inspired when he obliterated a maid's skull with a .45 bullet. His methods are heavy-handed, and not far removed from some of the savage tenacity possessed by Donald Hamilton's Matt Helm. If you love espionage thrillers with double-crosses, dastardly villains, sexy women, and Cold War hysteria, then the Monty Nash series is a mandatory read. I'm anxious to read the next installment.