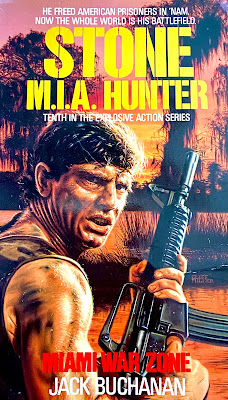 M.I.A. Hunter was a series of men's action-adventure novels published by Jove in the 1980s and early 1990s. The series was created by Stephen Mertz (Cody's War, Kilroy) and featured his outlines and editing with a revolving door of authors including Joe Lansdale, Arthur Moore, and Mike Newton. Crime-fiction author and popular blogger Bill Crider (1941-2018) contributed as well with his series debut, Miami Warzone. It is the 10th installment, originally published in 1988 and existing today in digital format through Wolfpack Publishing.

Miami Warzone is the first domestic appearance of Mark Stone, Terrence Loughlin, and Hog Wiley, the three-man retrieval team effectively known as “M.I.A. Hunter”. The series began with dangerous missions into Southeast Asia to rescue American prisoners held captive from the Vietnam War. Stone's team was working without permission from the U.S. Government, therefore their activities were highly illegal and placed them on a C.I.A. hitlist. But, the American government caught on to Stone's skills in the same way that they caught on to The Executioner. If you can't beat them, join them. So, a U.S. Senator (Harler I think?) in book seven liberates the three hunters and places them on the federal payroll working out of Fort Bragg. You're all caught up now.

In this 10th installment, Crider introduces readers to Jack Wofford, a former teammate of Stone's during the Vietnam War. He even helped to save Stone's life during a nasty firefight at a seemingly abandoned village. In a terrific backstory, Crider tells of how Wofford's brother succumbed to drug addiction and eventually died. To avenge his brother's loss, Wofford went vigilante and began running his own one-man vice-squad. Eventually, he had enough intel and dirt on some of America's most powerful drug dealers. The D.E.A. were impressed with Wofford's talents and placed him on the payroll, similar to what happened with Stone and the C.I.A. But, on a recent undercover buy, Wofford is caught and becomes imprisoned as collateral during a Cuban and Columbian drug war.

Stone receives a call from Wofford's wife stating that the D.E.A. isn't doing enough to free her husband. The trio takes the job to track down Wofford's whereabouts while also attempting to destroy the drug importing operation devouring Miami. The narrative has a tremendously high body count as the locations include park battlefields, a wild Everglades romp, the ultimate barfight, a mansion blowout, and even a shootout at an airport.

M.I.A. Hunter isn't Hemingway and never professed to be. Instead, it's a rip-roar, ass-kicking team commando series with explosive action and a slight dose of testosterone humor (Hog is a riot!). As much as I loved the old fashioned “bring 'em back alive” Vietnam rescue missions, the idea of Stone and company working domestically is a nice change of pace. The last two novel locations, the Soviet Union and Nicaragua, were both excellent choices to move this series into another dynamic. Crider's writing style is ultra-violent, but also balances out with a quality story laced with crime-fiction elements, sex, and a buddy cop camaraderie. In other words, this one is a series standout.