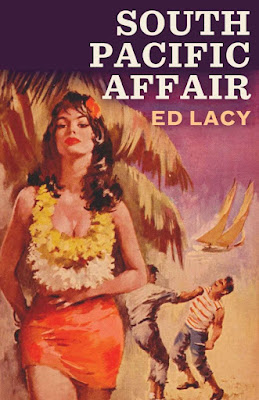 We've covered a lot of Ed Lacy's (Leonard Zinberg) crime-fiction, but his rare adventure novels have mostly gone unnoticed. I discovered a $2 ebook on Amazon called South Pacific Affair, originally published by Belmont in 1961. With a fistfight, a beautiful woman, and a boat on the cover, I was hoping this nautical adventure would provide me with an excellent escape from my average suburbia.

Lacy's first-person narrative begins rather haphazardly with protagonist Ray debating marriage with an islander girl named Ruita. They are both on the fictional South Pacific island of Numaga. After the conversation, readers are left puzzled as Ray gets intoxicated, pursues a nude fat woman, and is then punched by his co-worker/friend Eddie. It infuriates me when books begin without an explanation or clue of what the Hell is happening.

Through dialogue, readers learn that Ray and Eddie sail a small shipping vessel in the South Pacific. Their main gig is obtaining and selling copra, which is essentially the insides of a coconut. It isn't a lucrative business and the duo realize that most of their proceeds are spent on supplies, women, and booze. But, Ray is disgruntled with his life after discovering his wife having an affair with a Hollywood film producer. Disgusted with love, marriage, and the 9-5 life, he partnered with Eddie to become a seaman. Then, he met Ruita and fell in love. The issue is commitment, which sometimes isn't completely embedded in the male DNA. He's been burned already and doesn't want to make the same mistake again.

Unfortunately, that is really all that Lacy has going for him in this book. Ray and Eddie get involved in various shipments, fight with a rival, much larger crew, and have a small bout with a ship carrying natives infected with smallpox. This isn't riveting stuff and I was expecting the narrative to develop into some semblance of an adventure story or, at the very least, incorporate some sort of crime-fiction element. These things never come to fruition and the end result is an absolute dud of a novel. Stay away. There are so many better Lacy novels.