Children of the Dragon 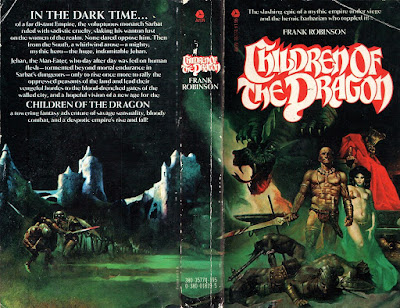 From my research, author Frank Robinson is a retired New York judge and an expert on coin values and collecting. He only authored one work of fiction in his short writing career. The book is Children of the Dragon, published in 1978 by Avon. Admittedly, a 450 page paperback isn't normally something I'm interested in reading, but the novel's cover art is extraordinary. It was painted by popular Spanish artist Manuel Perez Clemente, referred to as Sanjulian. His career work includes characters like Conan, Vampirella and magazines like Eerie, Creepy, and Famous Monsters of Filmland. In stereotypical fashion, I was totally prepared to judge a book by its cover.

As a long fantasy novel, Robinson spends some time building the world the story exists in. It's a fictional place called Bergharran, similar to Robert E. Howard's Hyborian Age. There are regions (countries), dialects, languages, cultures, and so forth that are explained in great detail. But, overall I speculate that Robinson mirrored parts of the book after the Timurid Empire of the 15th century, what is known now as modern Iran, Iraq, Afghanistan, Pakistan and portions of North India and Turkey. Bergharran is experiencing an age similar to a post-Civil War. The Tnemghadi (the North) defeated the Urhemmedhi (the South) and they now rule with an iron fist as a tyrannical empire. The book's sprawling landscape fits the book's narrative, a storyline that encompasses 20ish years of Bergharran history.

Over the course of time, the book examines several characters and their growth from poverty to royalty, most playing a supporting role to the chief protagonist, a man named Jehan Henghmani. He's married with two daughters, and in the opening pages it is explained that he had been captured by the Emperor of Tnemghadi. Jehan, a bandit by trade, is able to break his bonds and kill the executioner assigned to behead him. Because of this, and his inability to escape the dungeon, the Emperor imposes a strict punishment. He is to be tortured each day for the rest of his life. Any dungeon master that allows this prisoner to die under torture will receive the same punishment as Jehan. Further, he is fed only human flesh. These torture scenes, which is sometimes described in great detail, were extremely vile and disturbing. After years of abuse, Jehan's wife and kids are brought in and raped repeatedly in front of him.

Eventually, Jehan is able to escape his Hell and begins to create a new group of roving bandits. But, instead of stealing from the Tnemghadi, he wants to destroy them. The next 300 pages are saturated with Jehan's creation of a large military force that collides with Tnemghadi's reign. There are large swaths of land and regions that are slowly devoured through calculated battles. In essence, Jehan rises to become a new leader through military tactics. This is where the problem lies - the book's focus on continental reformation.

Robinson's book is captivating at times, and feels epic – as it should. But, the narrative is bogged down with so much political strife and turmoil that I became exhausted. This isn't a fantasy novel, nor is it science-fiction or sword and sorcery. There is no dragons or magic and there isn't anything cosmic. This is purely a fictional middle-ages type of story with normal people displaying acts of barbarism, brutality, and violence on one another. At times, the torture sequences rivaled one of the most graphic novels I've ever read, Jack Ketchum's The Girl Next Door. This isn't for the squeamish.

If political intrigue, royalty chess games, and the pursuit of power by ruthless, self-absorbed characters is your thing, then by all means reading this book should be a pleasant experience. Robinson is a great writer and the overall storyline is superb. But, at the end of the day, it's a lengthy book and requires some patience, and I simply don't have it.