Say it was Murder 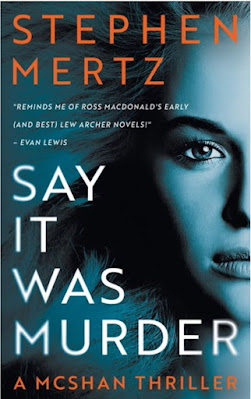 Stephen Mertz (b. 1947) is a mystery, action-adventure, and short-story writer that has contributed, or created, series titles like M.I.A. Hunter, Kilroy, Cody's Army, and the wildly successful Cody's War. He cut his teeth in the literary world as a Don Pendleton protegee, penning 12 novels in the hit series titles The Executioner/Mack Bolan from 1982-1986. He's utilized pseudonyms like Cliff Banks, Jim Case, Stephen Brett, and Jack Buchanan. But, perhaps his most descriptive name is “Mojo”, a moniker that friends and family (one in the same) use to describe Mertz through the lights, heat, and haze of a blues bar on the edges of a middle-of-nowhere Arizona town. In fact, the author's newest book is a love letter of sorts, an outlet to profess his love for the magical place he resides in.

In Say it was Murder, published in 2022 as a revised version by Rough Edges Press, Mertz describes Cochise County as Big Sky country. This slice of Southeastern Arizona paints the U.S. and Mexico border, a beautiful 100-miles stretch of open prairie and rugged mountains not to be confused with The Grand Canyon, Phoenix, or Tucson. Mertz places his private-eye protagonist, a fellow named McShan, in Bisbee, the real-life, neo-hippie small-town that he frequents. Mertz, through his fictional hero, experiences a profound connection with the area:

The desert will either chew you up and spit you out or will touch you in ways that are as deep and mysterious as they are difficult to express.

The fondness that Mertz fosters of the land and its lush beauty is only rivaled by one thing, his sincere love for crime-noir. In Say it was Murder, the author steps into the shoes filled by his literary heroes like Mike Hammer and Ed Noon. In fact, Mertz's private-eye, McShann could be a nod to private-eye Rex McBride, authored by Cleve Adams and Mike Shayne, created by Davis Dresser using the name Brett Halliday.

Like Mertz's other private-eye, Kilroy, McShan operates out of Denver, Colorado, a city that also holds a special place for the author. McShan is employed by Honeycutt Personal Services, a large agency with offices in every state specializing in detectives, cybersecurity, bodyguards, and kidnapping protection. This enterprise of ex-military and law-enforcement is ran by Miss Honeycutt, a 63-year old heavyset woman that inherited the agency from her father.

McShan's newest assignment is aiding a client named Marna, a divorced mother that hired the Honeycutt agency to find her missing daughter. When McShan arrives in Cochise County, he learns that the woman's daughter, Janine, has joined a mysterious religious sect. As McShan digs into the case, he learns more about Janine's step-father, a wealthy entrepreneur with a very violent streak. Connecting the dots, the case leads into energy and land development, illegal human-trafficking, incest, and the weird cult-like organization that has a grasp on Marna's family.

Comparisons are made to Ross MacDonald's fantastic Lew Archer series, and that may be valid, but I felt that Mertz's characters were wilder and more diverse. McShan contends with a deadly lesbian biker and her maniacal brother, the town's barber. I also felt McShan was more reserved in his approach, keeping the dialogue, brief and more directly linked to the case. There is a sexy smoothness to Mertz's inclusion of a blonde bombshell, a potential – seemingly obligatory – love interest for the gumshoe hero.

With its sturdy, well crafted plot, vivid locale, surprise twist, and shocking ending, Say it was Murder is a brisk, highly-satisfying crime-thriller by one of the genre's best storytellers.