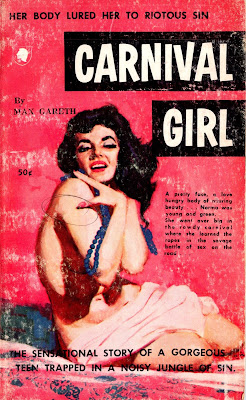 One of the authors that Cutting Edge has focused on is Stuart James, an underrated crime-noir author that also served as a staff writer and sports reporter for magazines and newspapers. James also became an editor for Midwood Books, a subsidiary of paperback powerhouse Tower Publications. I thoroughly enjoyed the Cutting Edge editions of James' novels Frisco Flat (1960) and Judge Not My Sins (1951). I was happy to discover another Cutting Edge title, Carnival Girl, authored by Max Gareth, a pseudonym employed by James. The novel was originally published in 1960 by a small, low-budget publishing house called Chariot Books, home of other underrated novelists like Arthur Adlon and John Burton Thompson.

Norma is a gorgeous Midwestern girl raised by an alcoholic single mom. When she's nearly raped by her drunken stepfather, Norma runs away from home. In the book's opening pages, readers find Norma at an Indiana diner using her last dime for food and coffee. Thankfully, the waitress displays some pity, and arranges for her to catch a ride “west” with a truck-driving customer. However, Norma doesn't realize that the waitress earned an extra tip by selling her to the highest bidder. On a lonely stretch of blacktop, the trucker rapes Norma before she escapes to a nearby farm. After being sized-up by a farm laborer, she manages to escape what is perceived as an attempted rape by flagging down two people traveling with the carnival.

The carny duo (slang for employees of a carnival) convinces Norma that she can make it in the carnival as a stripper. Back then, a fan favorite at rural, small town carnivals is the peep show, where men and boys with enough coins could enter a tent to watch naked women dance. Norma learns a few tricks and before long she is the carnival's number one attraction. But, she draws the attention of three specific men. 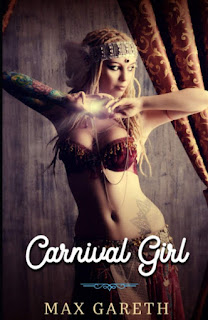 Speed is the good guy daredevil that performs motorcycle tricks. He falls in love with Norma, but she doesn't have the same feelings for him. Instead, Norma is lusting after Lee, the bad boy carnival drummer. There's also a man named Frank, who pitches Norma a lot of cash to come to St. Louis to work his nightclub. But, she later learns that Frank is in deep with the Mob and if she takes his job, she'll be passed around as a prostitute making a meager living lying on her back for criminals. It's a twisty, hot triangle with innocent Norma caught in the middle.

With Carnival Girl, Stuart James completes a vivid, often disturbing character study of this young, unfortunate woman and her abrupt, violent end of innocence. Like Judge Not My Sins proved, James was such a clever storyteller with an uncanny ability to make his characters lifelike. By using a common crime-noir trope, the traveling carnival, James is able to submerge this inexperienced character into a world of depravity. Norma is a living doll thrust into dangerous situations and guided by seedy men with below-the-belt motivations.

Carnival Girl isn't the proverbial happily ever after story of love on the run, but instead a more provocative look at young men and women pursuing carnal desires no matter the cost. It is these types of stories that made Stuart James such a talented, organic storyteller.