The Monster from Earth's End 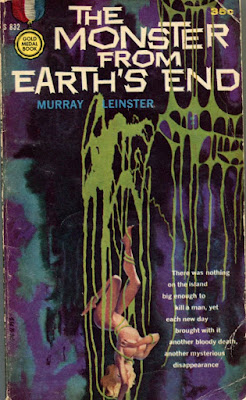 William Fitzgerald Jenkins (1896-1975) was a prolific writer of early 20th century fiction, including numerous science-fiction, adventure, and western stories for the pulps. He used pseudonyms like William Fitzgerald, Fitzgerald Jenkins, and Louis Carter Lee. Some of his science-fiction and pulp literary work was written under the pen name Murray Leinster. My first experience with the author is his 1959 Fawcett Gold Medal paperback, The Monster from Earth's End, written by Jenkins as Leinster. In 2019, it was reprinted by Gateway as an affordable ebook.

Gow Island (not a real place) lies just 600 miles from the Antarctic ice-cap. Because of its location, the island serves as a supply depot for researchers, scientists, and employees stationed in the Antarctic. Gow Island's population of 19 people are employees that re-supply, stock, and fuel vessels that make sporadic layovers en route to their destination. Visitors arrive on a weekly basis, but normally leave within an hour. Thus, these few island inhabitants live a rather slow, sheltered life under the guidance of the island's administrator, and book protagonist, Drake.

In the opening pages, Gow Island receives a radar message that a plane housing seven passengers and three crewmen will be arriving from Gissell Bay, Antarctica to refuel before heading back home. On board the plane are items retrieved from the icy surface – several penguins, soil samples, and some vegetation. However, Drake and company receive a disturbing, terrifying call from the plane as it approaches the island – someone, or something, is attacking the crew and gun shots are fired. For several moments there is radio silence, then the plane lands on Gow Island's airstrip on its belly. When Drake and co-workers approach the plane they hear one lone gunshot. Opening the plane's door, they are shocked to discover the pilot shot himself in the head on the runway and the rest of the crew has simply vanished.

The Monster from Earth's End works well as a survival horror novel. The personnel on the island contend with moving the plane off of the airstrip, but also what exactly happened to create these strange circumstances. The pilot's body is moved to a warehouse, but later than night Drake hears something moving inside the building and discovers the pilot's corpse is missing. There are twigs on the plane that seem to possess some form of intelligence. As the crew's dogs begin to die horrible deaths, and an employee goes missing, the power to the island is cut. Something wants to kill its prey in the dark, far from the light.

I can vividly recall watching John Carpenter's 1982 horror classic The Thing when I was a kid and being absolutely petrified with fear. That film was a remake of the 1951 movie The Thing from Another World which was based on the science-fiction novella "Who Goes There?" by John W. Campbell (written as Don A. Stuart). In many ways, The Monster from Earth's End sort of fits into that same universe. So much that a Wildside Press collection called Short Things featured shorts written by a selection of authors that tie into The Thing storyline. One of those short stories was "The Monster at World's End", authored by Allan Cole, which was obviously a nod to this novel.

If you enjoy this sort of survival horror, then The Monster from Earth's End is surely a must-read. I was a little underwhelmed by the “monster”, but the pace and atmosphere of the story kept me firmly entrenched in the novel's narrative. There are some truly creepy moments, but often I felt the book hadn't aged well over the course of 60 years. Your mileage may vary, but I recommend reading the book to make up your own mind on its longevity and legacy.