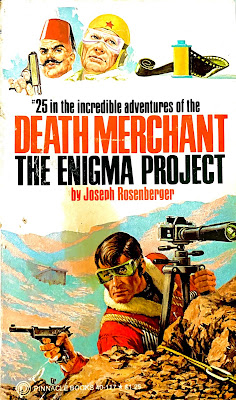 In November, 1977, Pinnacle published the 25th installment of Joseph Rosenberger's Death Merchant series. My reasonably intact paperback shows it is the second printing, a clue that this series was a big moneymaker for the publisher. Mostly, you can read the series in any order and the concept is really simple. Richard Camellion is a CIA agent, dubbed Death Merchant, that patrols the globe quelling international threats. Rosenberger thumbed through magazines like National Geographic to place his hero in exotic and dangerous locales to heighten the sense of adventure. In this case, it is the mountains of Ararat.

The Enigma Project begins with Camellion as an undercover mountain climber who has joined the Jasper Grundy Bible Institute. In the opening chapters, it's explained that this faux religious group was created by the CIA to use on a rainy day. The mission is for Camellion to climb to the heights of the Ararat mountains to place a specially designed, high resolution camera. This camera will quickly capture hundreds of photos that the CIA can analyze. The goal is to locate strategically placed satellite installations being utilized by the Soviet Union in Armenia. Or, something like that.

Camellion and two supporting agents join the study group under the intention of guiding them to a fabled position where Noah's Ark may rest. The group travel to Turkey on a helicopter, but unbeknownst to the passengers, the CIA has created a unique panel system that houses a small armory inside. This is unveiled to the passengers when they discover Camellion and others are packing heat for the climb. Camellion explains that mountain bandits and Armenians don't typically settle by just throwing rocks at unwanted guests. What he doesn't explain is that the group is expendable and their unfortunate deaths will be a sacrifice for the greater good.

Halfway up the snowy passage, the group encounter Soviet Armenians. In a series of exchanges, Camellion and his supporting agents fight the bad guys en route to the top. Problems include avalanches, harsh weather, Soviets, and a nagging religious scholar. Rosenberger writes the action sequences smoothly and places readers in the battle by describing who's on the flank, the perimeter defenses, and the combatants next moves. It's completely vivid and provides enough escapism for the average cubicle worker.

This series is fun in limited interactions. I prefer gritty team-combat novels, but in a pinch Death Merchant can provide some enjoyment. This installment is par for the course. Mileage may vary.