To the River's End 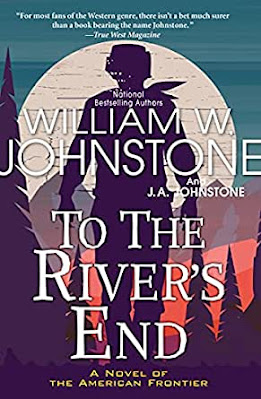 Rant - Kensington continues to swindle their fan base by suggesting that William W. Johnstone, who died in 2004, is still alive. On the back inside cover of the publisher's recent release, To the River's End, it states, “William W. Johnstone IS the New York Times and USA Today bestselling author of over 300 books...” Further, it states that he authored titles like Flintlock and Will Tanner: Deputy U.S. Marshal. The fact of the matter is that Mr. Johnstone had been dead over 10-years by the time those books were actually authored by ghost writers. Additionally, it states J.A. Johnstone is the co-writer of this book and that she had a hand in writing a number of prior titles. The reality is that she is Johnstone's niece, heir to the empire, and she hasn't written a published word. The back cover proclaims to readers that William and J.A. “...are the greatest western writers of the 21st century.” Hell, it even states you can email Mr. Johnstone at dogcia.two@gmail.com. If he responds, then I'll tap-dance on water and turn your milk into moonshine.

Review – To the River's End hit store shelves in October, 2021 and is only the second trade paperback to emerge from the William W. Johnstone camp. Unlike prior Mass Market Paperbacks, this one has a different color scheme, texture, art design and feel. The only other trade paperback that I'm aware of being the Target exclusive, Go West Young Man, from May, 2021. As I stated above, the cover states this is authored by William W. Johnstone and J.A. Johnstone but in reality it is written by one of a handful of revolving ghost writers – some great, some mediocre and some just plain 'ole bad.

The book is about two trappers, Luke Ransom and Jug Sartain, that partner up to independently capture beaver pelts in the fertile Rocky Mountains. Luke is the weapons expert and fighting man while Jug provides the comedy and tasty biscuits. While the two are skilled trappers, their fierce independence makes them a vulnerable target for the Blackfoot tribe. Without the support of the American Fur company or Hudson Valley, their presence alone infuriates the Blackfoot tribe. This rivalry is the premise of the book.

Like an assembly line, Luke kills the approaching Blackfoot throughout the long winter. But, not just fighting and killing them. It's a slaughterhouse so thick that the main problem isn’t the amount of Blackfoot warriors. Instead, Luke's biggest issues are A) Where to dump all of these bodies and B) What to do with all of the horses he acquires after mowing down these presumably inexperienced, incompetent Native Americans. Jug plays second fiddle and exists just to be shot twice and then nursed back to health.

To the River's End would be a gripping cold-weather survival tale ripe with action if the protagonists actually faced stiff opposition. Instead, it's like a Friday the 13th film where the immortal Luke elevates the body count using knives, arrows and lead. Readers, you deserve better than this. Author, whoever you are, I'm glad you are working and being paid to write. Everyone deserves the right to make a living with the talents they possess. However, I wish you had more time to write quality books instead of meeting deadlines for this sketchy western brand.