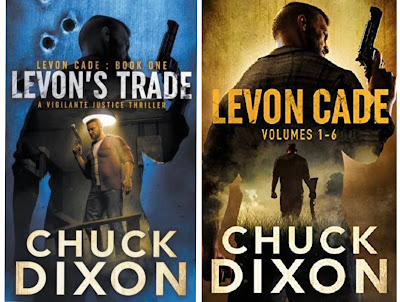 Chuck Dixon is a famous comic book writer whose work on Marvel’s Punisher series is regarded as a masterwork of the medium. Since then, he has been writing novels, including a popular vigilante series starring Levon Cade. The series debut from 2014, Levon’s Trade, has recently been reprinted by Wolfpack Publishing.

The novel opens in a depressed Huntsville, Alabama. Levon Cade is lucky to have a gig as a graveyard shift security guard on a construction site. The novel wastes no time establishing that Levon is a no-joke badass as he disarms and dispatches two thugs shaking down a Guatemalan laborer at the site.

We learn that Levon is a man with a particular set of skills learned during his shadowy time in the military. Joe Bob is Levon’s boss who does some homework and figures out that there’s more to his security guard than meets the eye. Joe Bob’s daughter is a college student in Tampa who has gone missing, and he hires Levon to find her. Levon’s got his own troubles involving an expensive custody battle over his daughter. Bottom line: he needs the money, and accepts the gig.

Levon travels to Florida to investigate, and the reader is given further glimpses into our hero’s character and capabilities. He’s a quiet and stoic badass with an almost supernatural ability to appear, disappear, and fight - like a ninja in blue jeans. As he gets closer to the truth and his Russian prison gang adversaries come into greater focus, the author avoids the temptation of delivering a cartoonish or over-the-top action story, instead opting for gritty realism.

Anyone who has ever read a Jack Reacher novel by Lee Child and wished it was written with the lean economy of a 200-page paperback from the 1970s will be very pleased with Levon’s Trade. Dixon writes in extremely short, punchy chapters with no irrelevant diversions. The characters are developed through their actions, not through the pages of introspective thought and inner monologues. Levon Cade is a Pinnacle Books action hero for the 21st Century.

There appears to be nine books thus far in the Levon Cade series - all offered at affordable prices with attractive covers. If the other books maintain the same level of pace and quality as this debut, it may be the best contemporary men’s adventure series on the market. As large publishing houses demand bloated 400-page novels to sell at Walmart and airport magazine shops, it’s a breath of fresh air to read a series that remembers what made the genre great. Chuck Dixon is the real deal, and Levon Cade is the modern hero we deserve.