The Executioner #53 - The Invisible Assassins 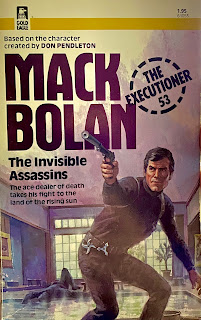 Author David Wade used the pseudonym of Alan Bomack as an anagram of the fictional hero Mack Bolan. As Bomack, David Wade authored  four titles in the Executioner series (#53 The Invisible Assassins, #58 Ambush on Blood River, #82 Hammerhead Reef, #87 Hellfire Crusade). He also wrote the second Super Bolan entry, Terminal Velocity and co-authored the debut of the S.O.B.s series, Barrabus Run. After recently watching a few Asian martial-arts movies, I wanted a “Bolan vs Ninjas” sort of novel. I went with Wade/Bomack's Executioner #53 The Invisible Assassins, originally published by Gold Eagle in May, 1983.

The book begins with Bolan assisting a young government agent on a stake out involving a world renowned Japanese scientist named Ken Shinoda. Apparently, U.S. intelligence had received chatter of Shinoda meeting with an unknown party in Los Angeles. Once Shinoda appears, he is quickly assassinated by someone in the shadows. After a brief skirmish, the young agent is murdered and Bolan is injured.

After discussions with April and Hal, Bolan wants to learn if Shinoda was buying or selling intelligence. The clues lead to a series of photographs that Bolan discovers in Shinoda's apartment. These photos are of various Japanese leaders and a rival scientist named Okawa. Who are in the men in the photo? Was Shinoda killed for taking these photos? Under the guise of a U.S. Security consultant, Bolan travels to Japan to coordinate training exercise with a high-level security agent named Nakada.

Good Executioner novels typically involve a little bit of sleuth work and a lot of action. Thankfully, David Wade nails the concept and blends a high dose of action into a smooth murder investigation. Through the prescribed 185-pages, Bolan aligns himself with an American female journalist. His adventures involve a number of physical fights in restaurants and alleyways, an escape from a submerged car, and an escape from an imperial fortress called Shoki Castle. I liked the idea that the enemy was part of some grand conspiracy that dates back to ancient times, eventually connecting to a modern day faction called The Circle of the Red Sun. It's all comic book nonsense, but wildly enjoyable.

The Invisible Assassins contains all of the necessary ingredients to tell a great post-Pendleton stand-alone story. The martial-artists, throwing stars, and imperial guard was a unique blend that helped provide a more unique enemy for Bolan. Highly recommended.