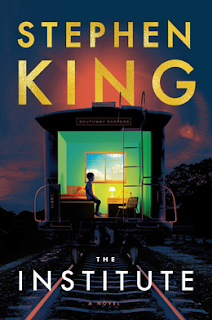 Master storyteller Stephen King has honed in on a horror sub-genre – kids with psychic abilities on the run from a shadowy organization. He first utilized the concept with 1981's Firestarter, featuring telepath Charlene McGee on the run from a government agency called The Shop. His novel Doctor Sleep features an organization called True Knot hunting down kids and adults with “the shining.” King serves this platter with his 2019 novel The Institute. It was published by Scribner and exists in multiple formats. Based on King's prior works, I would imagine a streaming show, graphic novel series, or the movie is already in the works.

My paperback version weighs in at 650 pages, so there's a lot to unpack. The novel's first 50 pages is like the first act of a 1950s crime-noir (or John Ball's Tallon series) as readers are introduced to the former Florida police officer Tim Jamieson. Tim is paid to relinquish his seat on a commercial airliner to make room for a government employee. After deciding to pocket the refund and extra money, Tim hitchhikes up I-95 from Florida to New York. But, he ends up in the cozy town of Du Pray, South Carolina and immediately falls in love with its Mayberry-like charm. He takes a night security post with the small, local police department and slowly becomes ingrained into Du Pray's lovable population. He then disappears from the narrative for the next 400 pages.

Protagonist Luke Ellis is introduced as a likable 12-year old genius that possesses telekinetic abilities. In the middle of the night, masked individuals break into Luke's Minneapolis home and kill his parents. The intruders drug Luke and he awakens in The Institute, a secret facility in a rural stretch of Maine forest. He quickly meets other kidnapped children, who form a sort of “loser's club” to overcome their scary predicament. The children earn tokens for being good, which they can use to purchase extra goodies like alcohol, marijuana, and cigarettes. The staff is led by Mrs. Sigsby, who oversees experiments on the children to heighten their telekinetic powers.

The book's first half focuses on Luke and his friends stay in a section called the “Front Half”, a safer portion of the facility where the staff is mostly nice and the experiments aren't excessively painful. Luke is asked to stare at lights and dots while subjected to daily doses of injections. The torment of Front Half is that these kids don't know what became of their prior lives. Luke wonders what happened to his parents and what his role is with the institute. Sigsby motivates the kids by advising them they will wake up in their own homes with their memories erased of everything that transpired there. As time goes on, Luke's friends are individually chosen, against their will, to relocate to Back Half. It's here that he learns that the kids are subjected to horrific torture and most don't survive the ordeal. To avoid being taken to Back Half, Luke must escape the institute.

Needless to say, there's a lot more to the novel than simply imprisonment and escape. Luke befriends a staff member and she has her own backstory. The novel tiptoes to the grand reveal, which is the purpose and use of the institute. There's the inevitable meeting between Tim and Luke, and at that point King transforms the novel from horror to action-thriller. All of these elements build to a giant crescendo, but like King's historic flaw, the ending leaves a lot to be desired.

My biggest issue with King's modern work is that he injects plenty of commentary on the political landscape (of course he jabs Donald Trump) and has a lot to say about debt. There's a centerpiece about credit cards and revolving bills that plague our society. Why King feels as if he knows anything about the average American is beyond me. He is worth a half-billion, earns $20-million per year and has had the right to call himself a millionaire for 40+ years. It's this sort of thing that dampens The Institute.

For example, King says that Tim is paid just $100 per week to work for the police force. He also has Tim pay an Uber driver with physical cash that the airline provided to him as a refund. The real world doesn't work this way. It's as if King is so far removed from everyday life that his stories lose some plausibility. The Institute really didn't need the uneducated social commentary and the obvious disconnect removed me from some aspects of the story.

Nevertheless, I mostly liked The Institute and found Tim and Luke's story enthralling. King hasn't lost any of his storytelling abilities, but he has started to blur the lines between his abstract horror creations and all-out action-thrillers. If you can appreciate the modern day version of Stephen King, you'll love The Institute.