The Butcher #33 - Go Die in Afghanistan 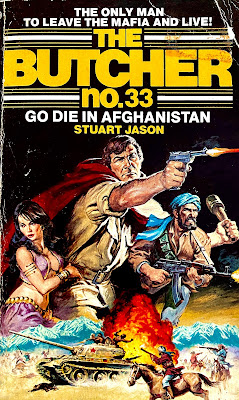 Using the skills I acquired in Mrs. Miller's 6th grade math, that's an average Butcher score of 3.6. That's filthy ugly. But, my problem is that I own the whole series. I hope you don't.

Go Die in Afghanistan is supposedly a series stand-out. It was published by Pinnacle in 1982 and authored by Michael Avallone. It also has a great painted cover by the esteemed Earl Norem. At just shy of 200-pages, the premise has Butcher, aka “Iceman”, in Afghanistan to rescue a NASA nuclear missile expert from those pesky Soviet invaders. He knows he's never accepted a more crucial challenge. I know I just want to avoid placing a metal fork between the pages and microwaving the book.

The narrative begins with Butcher planning a departure from Tel-Aviv. After receiving a call from White Hat (a U.S. spy agency), Butcher is advised that his next mission starts right now. But first, he shoots an old villain named Peanut Man Pennzler and stuffs him in a hotel closet. Then, the hero heads to Afghanistan to rendezvous with the rebel forces opposing Soviet occupancy.

The rebels are intensely infatuated with Butcher and are well educated on his prior exploits with the mob. A fierce, sexy rebel named Tzippora advises Butcher that her “juices flow for him.” In a rather gross sex scene, Tzippora advises Butcher that it's that time of the month, but can't suspend her desires. Butcher admits that this “birds and the bees” encounter with Tzippora will be unlike anything he's ever experienced before.

Eventually, Butcher and Tzippora are captured by the Soviets and harshly interrogated. Butcher uses the old explosive chewing gum routine (chew it, then throw it, kaboom!) and escapes. But, before the final dash, Butcher shoots his P38 from the hip and precisely places a bullet down the barrel of a Soviet's gun. Avallone describes Butcher as the equivalent of Robin Hood, Davy Crockett and Sergeant York. Then, all of the supporting characters die, Butcher returns home. The end.

As silly as this all sounds, and believe me its totally bonkers, Go Die in Afghanistan is still fun. At this point, I have to start treating The Butcher title as a modern pulp. His silly, over-the-top, completely impossible antics are no different than say...Black Bat or Masked Detective. It's zany 1930s and 1940s pulp hero nonsense, but more dirty and violent.

I can't think of The Butcher as a serious spy series on par with Matt Helm or Nick Carter. It's the wrong way to look at this series. Suspend disbelief, put your mind into a pulp magazine, and then read The Butcher. It  may be the only way to gain any sense of enjoyment. If not, then you'll end up with an exploding microwave.

Go Die in Afghanistan is a 6, bringing the average score up to...4. Yikes.