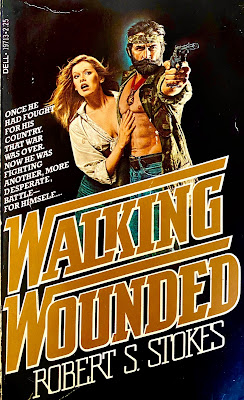 According to his Amazon author page, Robert S. Stokes majored in journalism at the University of North Carolina. In the early 1960s, Stokes served in the U.S. Army in Europe before becoming a full-time freelance writer for various magazines including Newsweek and Life. His career led him to Saigon to cover the Vietnam War, an experience that aided him in writing his first novel, Walking Wounded. It was originally published by Dell in 1980, and I can't locate any information to suggest it was ever reprinted.

The novel begins by introducing readers to Jim Bonner, a former Vietnam veteran that now works as a hitman for the C.I.A. After numerous years of death and violence, Bonner is beginning to crack up. During an assignment to physically assault a target in Manhattan, Bonner snaps and fatally shoots the man. Fearing that he's now on a C.I.A. hit list, Bonner flees to Las Vegas to consult with a former military buddy named Cobb.

In the deserts of Nevada, Bonner hightails it in a van loaded with weapons. He knows the agency has targeted him, but he plans to stay alive as long as possible. On a rural stretch of blacktop, Bonner finds a woman named Karen stranded with her young son. Granting them a lift, Bonner discovers that Karen is a druggie that's been booted from her apartment. She has nowhere to go, so she's in for the Hellish ride with Bonner.

The narrative settles in as Bonner, Karen and her son make the long road trip to destinations unknown. Along the way, Bonner stops in to see old war buddies and friends he's made throughout his career with the agency. On cue, Bonner's boss sends a veteran named Gereke to locate, and eliminate, Bonner. Thus, the narrative builds to the inevitable confrontation between the experienced government assassins.

Walking Wounded is the perfect title for the novel because it describes Bonner's inability to cope with his responsibilities. He's in continuous pain from horrific burns he experienced during a napalm drop (which makes me wonder how he even gained the agency gig). He's on a steady stream of heavy narcotics that have really spaced him out. He's also suffering from severe PTSD and finds it hard to decipher reality from war-torn Southeast Asia.

Stokes' validates Bonner's condition with numerous flashbacks to Bonner's war experience. These scenes range from drug use in the jungles and barracks to firefights with Vietcong. In a unique parallel, Bonner recounts memories of his father and the mental anguish he endured from World War 2. The author has a lot to say about the poor state of Veteran Affairs in the 1980s, the cyclical nature of violence, and America's dependence on narcotics (a timeless statement). It's clever that Bonner replaces his father in war, and Gereke replaces Bonner in post-war operations. It all ties in as a Yin-Yang concept.

Despite the book's cover, Walking Wounded isn't really what I would consider a strong candidate for a 1980s men's action-adventure novel. This is more of a thriller with action sequences mostly replaced with social commentary and drug use. In that regard, Dell performed a disservice to Stokes. It's never a boring novel, but the cover suggests a Rolling Thunder sort of premise with a more traditional hero fighting some sort of stereotypical bad guy. Stokes' is delivering much more, with heroes and villains that aren't as easily defined. If you want something remarkably different, Walking Wounded may be worth the investment.