The Revenger #02: Fire in the Streets 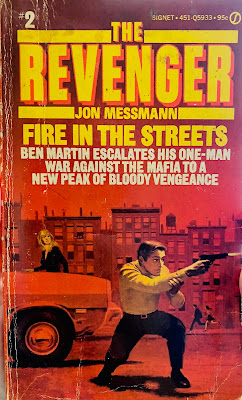 Paperback Warrior continues to devour the literature of Jon Messman. We've covered his series titles like The Trailsman, Handyman, Canyon 'O Grady, The Revenger, and even his gothic stand-alone novels under various pseudonyms like Claudette Nicole. My first experience with the author was the debut novel in The Revenger series. Inspired by Don Pendleton's The Executioner, the Signet series began in 1973 and ran six total volumes. The entire series has been reprinted in new editions by Brash Books with an introduction by yours truly.

The book begins with some flashbacks to the events that occurred in the series debut. The quick story is that New Yorker Ben Martin is a Vietnam veteran who experienced the death of his son by mobsters. Avenging his son's murder, Martin became a one-man army and destroyed the local mob. At the end of that novel, he left his wife to pursue an indiscreet lifestyle using the new name of Ben Markham (Messman had never intended the series to continue).

Now, it's explained to readers that Ben has lived in the Chicago suburbs for a year. He began working for Alwyn Beef Products and worked his way up to a senior manager due to his experiences as a grocery shop owner. But, Ben is attacked one evening at work by enforcers working for mobster Nick Carboni. After killing the attackers, Ben returns home and starts to question his life. In his own headspace, Ben realizes that he has always wanted to kill again, to right the wrongs, and fight evil. But, in a reversal, he also wants to live a normal existence that isn't smeared in blood.

What makes The Revenger so great is that Messman doesn't deliberately set out to create a hero for readers. It's never just a good guy with a gun. Like the debut, he slowly has unfortunate events consume Ben's life. It is like an erosion of sanity that reveals Ben's hard-hitting talents. He's meant to kill the bad guys, and he has the skills and talents based on his experiences in Vietnam, but he is hesitant. Slowly, Ben is pulled into this mystery and must fight again.

Ben's employer is a friend, but he's also a terrible gambler. After losing a great deal of money in the gambling rackets, Carboni has struck a deal with him. The mob will infiltrate his business and in return, Carboni wipes the IOUs off the table. Once Ben learns the reasons for the attack, he puts together an elaborate plan to wipe out the mob at strategic locations. From rooftops, he begins assassinating key personnel with different European rifles, weapons he leaves at the scene to confuse Carboni. But Messman also has Ben fistfighting with mobsters as well as a fiery car chase on the highway.

What makes this story unique is that it involves three separate women that are experiencing individual struggles directly related to Ben's mission. Carboni's wife is resistant to her husband's criminal behavior and wants out. When Ben's friend and co-worker is killed, he falls into a friendly relationship with the man's widow. But, Ben's love interest in the story is his employer's wife, a defiant woman that knows her husband is a gambling junkie. These three women are liberally featured throughout the 135-page narrative.

Fire in the Streets is just as good, or better, than its predecessor and rivals some of Pendleton's best single-digit efforts on The Executioner. Imitation is the best form of flattery and Messman clones a Mack Bolan styled story while also injecting a great deal of emotional drama. It's violent when it needs to be, and Ben proves to be a capable hero when the gunfire begins. The end result makes The Revenger simply fantastic.