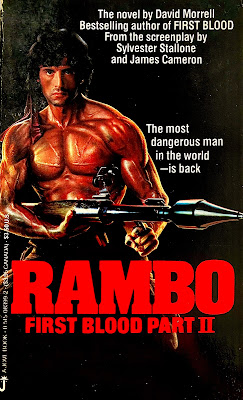 In 2016, Gauntlet Press, in collaboration with Borderlands Press, re-printed David Morrell's novelization of Rambo: First Blood Part II. What's interesting about the reprint is the author's lengthy, detailed explanation of how he became involved in the project. I highly recommend reading, or listening to the audio book edition, if you love books. You don't need to be a Rambo enthusiast or fan. It's a spellbinding commentary if you love the films as much as I do, but for a casual reading fan Morrell's involvement and writing experiences about creating a novelization of the script was just so captivating.

Morrell authored First Blood in 1972, the book from which the 1982 blockbuster film was derived from. That book is much different than the film, as I explained in my review. Mostly, Rambo is a more arrogant, cocky kid in the novel and at the end of the book ***spoiler alert*** Rambo dies. In the film, he doesn't.

In the author's introduction of Rambo: First Blood Part II, Morrell explains that he had no idea a film sequel was in development until he read it in the newspaper (authors seem to be the last to know). Shortly after, the film's development team, Tri-Star Pictures, contacted Morrell about writing the novelization of the film. Back then, films were seen at the cinema or on network television. Streaming didn't exist and VHS/laser disc wasn't mainstream (or affordable). Novelizations became important because they presented that middle ground between theatrical release and the “Sunday Movie of the Week.” The average consumer may have missed the theatrical release, so reading a novelization was an appealing alternative.

Morrell politely turned the project down because he was already writing a novel, 1984's Brotherhood of the Rose, and his version of the character ***spoiler alert *** died. But, Tri-Star kept encouraging Morrell to get out in front of the film because it was going to be BIG. Tri-Star had no other option than Morrell simply because contractually no one else at the time could write a Rambo related novel.

Needless to say, Morrell became involved (a decision that included a conversation with his friend Max Allan Collins), but was only presented a VHS tape with one scene from the film. Finding it impossible to write a novel based on a film he's never seen, Tri-Star provided Morrell a rough draft of the script written by both Sylvester Stallone and James Cameron (Terminator). That draft is what Morrell used to write the novelization. However, that draft was heavily modified by Stallone due to creative differences with Cameron. Thus, Morrell's book is an alternate version, one that I had never seen before. As a fan of the franchise, reading this book seemed mandatory.

In the novel, John Rambo is in a prison labor camp breaking rock by day and huddling in the dark shadows of his cell at night. His former Commander, Col. Sam Trautman, pays Rambo a visit to offer him a deal. The U.S. government has authorized a mission into Vietnam to take photos of a prison camp reportedly containing American P.O.W.s. With the Vietnam War over, the public had become infatuated with the idea that these P.O.W.s were still alive and being held as political collateral. The unit running this solo mission is a contracting company led by a guy named Murdock.

Rambo later learns that this Vietnamese prison camp is the same one he was held at. This was the home of pain, a horrific place where Rambo was tortured. Because he was able to escape, the contracting company feels that Rambo is the best operative for the job. He knows the area, the camp layout, and other important details. Soon, Rambo is piloting a chopper into Thailand to meet up with Murdock and Trautman. He's provided a sophisticated portable satellite and a camera (ancient tech today), but Rambo wants weapons and the chance to break the prisoners free. This is strictly forbidden, and Murdock explains that the photos will be used to authorize a clandestine Delta Force unit to retrieve the prisoners.

Mostly all of this follows the final film version, but once Rambo enters Vietnam, it changes. After surviving a parachute fiasco, Rambo enters the thick jungle to meet up with an undercover Vietnamese ally named Co. Together, the two of them negotiate a boat ride up river to gain an access point to the camp. The romantic spark between Rambo and Co isn't the same as the film. Co does ask Rambo to take her back to the U.S., but it isn't based on a romantic interest.

Once Rambo and Co have a vantage point to the camp, Rambo advises Co that the camera was lost and that the new deal is to rescue a prisoner found tied to a cross. It's here that Morrell absolutely shines. The author provides a brief history on archery, how the weapon has evolved over the centuries and why Rambo prefers the weapon over a more capable tool like an M-16 or AK-47. I found this so intriguing and Morrell's detailed explanation of the importance of archery, and Zen, helped define the hero even more. There's also some history on Rambo's upbringing, his abusive father, and Native American heritage. Again, these are book details that really made Rambo a more dynamic character as opposed to film.

When Rambo is captured by the Vietnamese, there's a brief backstory on a torturer named Tey, the same soldier that tormented him years ago. Obviously, the two have a heated rivalry, but the main antagonist is a Soviet interrogator named Podovsky. The torture sequences are mostly parallel to the movie - slime pit, leeches, and electric shock. The book's finale is similar to the film, but Co's importance and the dealings with a double-dealing pirate captain are modified. The film's intensity, rugged action sequences, and overall violence transcend to the printed page in the same fashion. Morrell brilliantly conveys the movie's emotion and exhilaration.

If you love the film or if you're just a casual fan, David Morrell's novelization is a thrilling action-adventure experience. In my opinion, it really just exists on its own. Details regarding the movie or franchise aren't important in the grand scheme of things. Rambo: First Blood Part II is just an awesome story and a pleasurable reading experience. If nothing else, I highly recommend reading the author's introduction. It's an introspective revealing of what goes into creating a novelization and a must read for anyone interested in the concept.