Let Me Kill You Tenderly 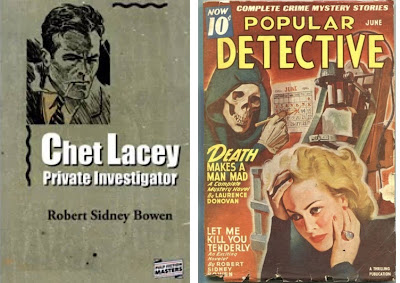 Robert Sidney Bowen (1900-1977) was a World War One aviator who became a pulp writer from the 1930s into the 1950s. In 1946 and 1947, he wrote a series of short works for Popular Detective starring a private investigator named Chet Lacey that have been compiled into an ebook by The Pulp Fiction Book Store. My introduction to the author and character is “Let Me Kill You Tenderly” from June 1946.

As the novella opens, Private Eye Chet Lacey is gearing up for a well-earned Mexico vacation when an ex-girlfriend comes ringing. These days her name is Vivian Ames, and she’s married to a wealthy bank president named Ken. Well, Ken has been kidnapped and the bad guys are demanding a $50,000 ransom from Viv in exchange for her husband’s safe return. No cops or the banker dies. Viv needs Chet’s help.

Simple setup, but things quickly become complex. There’s good reason to believe Ken faked his own kidnapping. But why would he do that? It’s like stealing $50,000 from himself, right? That’s the mystery that Chet needs to solve. Things get crazy, violent and action-packed pretty quickly as Chet navigates his way through a ransom money drop that becomes a gunfire bloodbath.

The bodies pile up, and Chet eventually solves the case in a tidy and logical conclusion. Overall, “Let Me Kill You Tenderly” was a rather generic hardboiled private detective yarn, but completely enjoyable and well-written. We’re lucky there are outfits like The Pulp Fiction Book Store keeping this old stuff alive. Check them out.