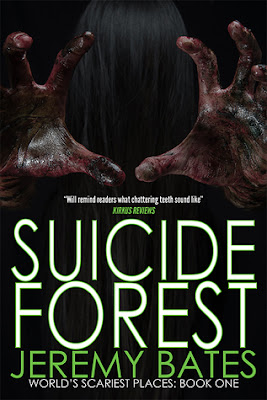 Suicide Forest is based on the very real “suicide forest” in Aokigahara, Japan (also known as the Sea of Trees). Sadly, under this tranquil, dense canopy of trees, over 100 people take their own life each and every year. Bates uses this bizarre magnetism to construct this survival-horror novel.

Ethan and his girlfriend Mel are American teachers working temporarily in Japan. After agreeing to hike Mt. Fuji, the couple is joined by Mel's high school friend John, a co-worker named Neil and Ethan's best friend Tomo. When the book begins, the group of friends is near the entrance of Aokigahara debating on a hiking /camping in the forest after heavy rains delay their climb. After meeting two Israelis, Ben and Nina, the whole group embarks on a hiking trip into the “suicide forest”.

After a few hours, the group finds a corpse hanging from a tree, an old abandoned car, and a thick atmosphere of doom and gloom (obviously!). The group eventually camps and awakens to find Ben dead and hanging from a tree. Thinking he committed suicide, the friends attempt to hike back out of the forest to find the police. Soon they become lost and Neil develops a traumatic case of the runs. Lost, with a corpse and stacks of diarrhea, the friends begin hearing noises in the forest. After Tomo is found dead (another hanging corpse!) and John is nearly killed, Mel and Ethan discover that the “suicide forest” has quickly turned into the hills of homicide.

At 350-pages, Suicide Forest never really feels bloated or overextended. In some ways it reminded me of another tight survival thriller, The Ruins by Scott Smith. Ethan's jealousy of Mel and John's relationship, John's military experiences in Iraq, Tomo's Japanese humor and Nina's sexuality all play important roles in keeping the narrative interesting and propulsive. The forest killers (or supernatural entities) are truly scary and Bates walks the balance beam on revealing just enough to keep readers guessing on what is really happening in these dark woods.

Like my prior experiences with Bates, his stories continue to have a unique flavor. With over 20 published horror novels, this author still maintains quality over quantity. He's really something special and I can't wait to read more of his work (translation: I'm going to raid more of my friend's Jeremy Bates collection).