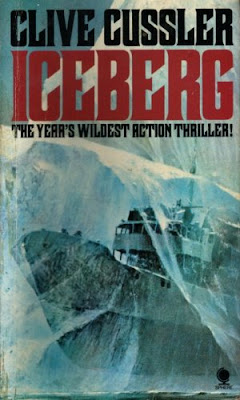 Clive Cussler (1931-2020) was a massively-popular novelist who dominated the bestseller lists for the duration of his writing career. His most enduring series character was Dirk Pitt, a troubleshooter for the fictional National Underwater and Marine Agency. My first exposure to the author and the character was his third installment, 1976’s Iceberg.

The book opens with a U.S. Coast Guard mission mapping the locations of icebergs floating in the North Atlantic near Newfoundland. From the air, the Coastie crew spots one impossibly large iceberg - 200 feet high weighing upwards of one-million tons. Closer examination of the iceberg reveals the impossible - an entire ship embedded within the ice but still visible from the sky. The Coast Guard estimates that once the iceberg drifts into the gulf stream, it's sure to melt - likely submerging the ghost ship into the depths of the sea. The iceberg must have dislodged from some northern glacier, but there’s no way to know its origin.

Enter Dirk Pitt. He’s an U.S. Air Force Major on permanent loan to NUMA - the National Underwater and Marine Agency. NUMA dispatches Pitt to a Coast Guard cutter with a mission to get inside the ghost ship and better understand what’s happening. As a character, Pitt is a combination of James Bond and Doc Savage. He’s a funny and likable hero stacked with core competencies. He can fly a helicopter, dive to great depths and bag the babes as needed. His deductive capabilities rival those of the great Sherlock Holmes.

The providence of the ship-in-the-berg is a plot point that I won’t spoil for you here, but it only serves as starting point into a variety of mysteries Pitt is called upon to solve over the 400-pages. He’s a smart cookie and not afraid to kick ass when needed. His relationship with his Admiral boss and the boss’ lovesick personal secretary make for some fine human moments throughout the paperback.

I was expecting Iceberg to be filled with dense plotting and littered with incomprehensible nautical jargon that would cause my eyes to glaze over. I’m pleased to report that Cussler avoids this trap and makes the pages fly by with a basic good guys vs. bad guys plot and a propulsive story. His books are about twice as thick as other men’s adventure paperbacks from the same era, so I was expecting a complex story akin to the work of Tom Clancy. Instead, Iceberg was pulpy as all-heck. The action and villainous motivations were over-the-top like a good Destroyer novel, and the layered twist endings were pedestrian, outrageous and fun. No one should ever accuse Cussler of writing high-brow, smartypants fiction. I hereby stand corrected.

The appeal of Cussler’s novels is now clear. If Iceberg is any indication, the series is a lot more fun than you might expect. The books can apparently be read in any order, and there are plenty of lists online ranking them based on quality. I look forward to diving deeper into this author and his famous series. Recommended.