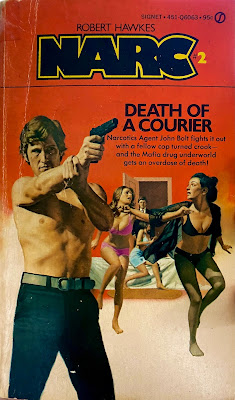 Marc Olden (1933-2003) is a familiar name for crime-fiction fans. He authored series titles like Black Samurai, Narc (as Robert Hawkes), and The Harker File. In addition to series titles, Olden penned 17 stand-alone novels and two works of non-fiction. We've covered both Black Samurai and Narc and I was anxious to read more of his work. After enjoying his Narc debut, I wanted to revisit the character with the second installment, Death of a Courier. It was published by Signet in 1974.

You can read the series in any order. The gist is that John Bolt is a seasoned narcotics agent working for a government agency called D-3. The agency has ten regional setups covering all 50 states. Nine of these operations cover 49 states, the tenth covers New York City, where Bolt has worked for over a decade. He reports to Sam Rand, who then reports to a guy named Craven, D-3's head honcho.

Death of a Courier lives up to its name. The novel's premise is that drug couriers for Vincent DeTorres, a Cuban mob, are being murdered by enforcers working for a New York mobster named Don Rummo. Bolt's entrance into this drug war begins in Central Park when a courier he is tailing is shot and killed by hired guns. Reporting the incident, Bolt then learns that couriers in big cities are being killed. He then gains the assignment of digging into the details, and this is where Olden shines.

Undercover, Bolt infiltrates DeTorres' mob by partnering with an enforcer named Ortega. There are numerous firefights, but the most memorable one entails 20-pages. In it, Bolt and Ortega find themselves in a Detroit airport to receive a large shipment of heroin. Thankfully, the deal falls apart and the scene explodes as these warring factions shoot it out in close quarters. Bolt's use of a .45 Colt and shotgun reminded me of the intensity of the opening scene in the series debut. Olden describes these action scenes with so much detail that readers can almost smell the cordite.

While the war between rival mobs is really interesting, Olden introduces another exciting addition to the plot. There is an included backstory of Bolt's former partner, Paris, being brutally beaten by racists. In rehabilitation, Paris feels that the agency failed him. Months later, Paris kills the racists and enters a life of criminality. Bolt learns that Paris has re-emerged as an enforcer for Don Rummo and that he has vowed to kill seven Narc agents, one for each year that he served the agency.

Needless to say, Death of a Courier was simply awesome. Olden is a great storyteller and I felt that the narrative was soaked with realism. A year before this novel, the author wrote a non-fiction book titled Cocaine, a deep dive into New York's drug trade. Partially due to this, the Narc series doesn't seem terribly far-fetched like a Butcher or Death Merchant entry. Further, Olden's martial-arts studies lends credit to some of the fight scenes.

If you are bored with the superhuman vigilante stuff, Narc is a must read title. These books are becoming more and more pricey, so I encourage you to get them now. Remember to search under Olden's pseudonym of Robert Hawkes. You'll thank me later.