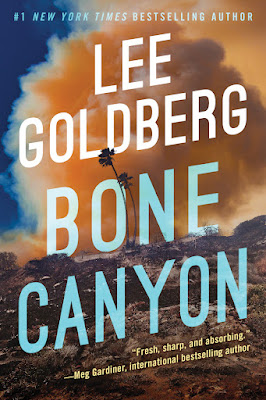 Script writer and novelist Lee Goldberg rocketed into the New York Times Bestseller list with the successful series Fox & O'Hare, co-authored by Janet Evanovich (Stephanie Plum, Knight and Moon). Along with successful titles like Monk, Charlie Willis, and Ian Ludlow, Goldberg has recently concentrated his efforts on Eve Ronin, a crime-fiction title that began in 2019 with Lost Hills. I read and reviewed the novel and found it to be an exciting, high-quality start to the series. In 2021, the second Eve Ronin novel, Bone Canyon, was published. It's available in physical, digital, and audio editions.

In Lost Hills, Goldberg introduced Eve, a rookie homicide detective working for the Robbery-Homicide division of the Lost Hills Sheriff's station, a mid-sized city in South-Central California. Eve is despised by most of her fellow officers for short cutting the seniority climb. After an off-duty arrest of an intoxicated, disorderly celebrity, Eve discovered that the incident was captured on video and released to social media. The incident and footage made her the local hero and a political pawn utilized by the Los Angeles County Sheriff's office. Needing the positive image, they promoted Eve, a prior patrol cop, to homicide detective. In the debut novel, Eve solidifies her local hero status by valiantly solving a triple murder.

What makes Eve a different type of hero is how much she avoids fame and fortune. After a second video becomes viral, her media status escalates. A Hollywood agent wants to sign her for a television deal, endless reporters want an exclusive, and her mother and sister both want her to look glamorous for her newfound spotlight. But Eve doesn't care about anything other than her job. She's resilient and steadfast in her mission to serve the people. She repeatedly declines TV deals and interviews and continues working cases with her soon-to-be retired partner Duncan “Doughnuts” Pavone. Eve is Duncan's mentor, a relationship that transcends from student and master to something more akin to a niece and uncle.

In Bone Canyon, Eve and Duncan are called to investigate the remains of a human skull found in the Santa Monica Mountains. During the search for more bone fragments, Eve is introduced to a bookish, yet charismatic anthropologist named Daniel. The two immediately have a chemistry and Eve relies on Daniel's experience to piece together a fragmented skeleton. In doing so, Daniel locates more skeletal remains of another individual. This discovery expands the examination into two cases that are possibly unrelated.

Through trials and tribulation, Eve and Duncan face physical and emotional adversity. There's political upheaval when the two detectives trace the clues back to a fraternity of officers within the Los Angeles Sheriff's Department. Eve's mental fortitude is put to the test when she carefully walks a balance beam of time-management, health, and her eroding camaraderie with her co-workers. In addition to the work stress, her family life continues to be a burden. Her mother, a comical whirlwind, remains persistent in belittling Eve's career choices. In an important side-story, Eve's sister introduces her to a physical therapist in hopes that it paves the way to romance.

Bone Canyon is superb procedural fiction, complete with action, suspense, and an exhilarating pace. Every page means something. Aside from the twists and turns of the case, readers are thrust further into Eve's personal life, with a more dynamic awareness of her love life, personal attrition, media stardom, and her inevitable future without the veteran experience of Duncan.

This novel is a real cornerstone of the series, one that places Eve at the proverbial crossroads – fight for the truth despite the deadly risk or find solace by gratifying the corruption. Her against-the-grain attitude and determination makes her one of the most independent characters in ages. Her decisions are hers alone to make, and even Lee Goldberg has no say in the matter. She's doing it her way, and her way is what readers will love. I can't wait for the next one.