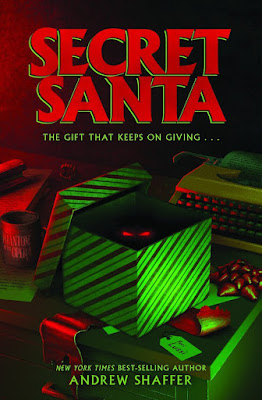 Andrew Shaffer studied writing at Chicago's The Second City and is now a columnist for Huffington Post and RT Book Reviews. He created an atheist seasonal card company that was featured on The Colbert Report and co-owns the independent publisher 8th Circle Press. Shaffer became a NY Times bestselling author with humorous works like Fifty Shames of Earl Grey and How to Survive a Sharknado and Other Unnatural Disasters. I was searching for a holiday read and stumbled on his 2020 horror comedy Secret Santa. It was published by Quirk Books and is available in physical, digital, audio formats.

The novel takes place in 1980s New York and stars a spunky publishing editor named Lussi Meyer (and a hideous Nazi Devil Doll). Lussi's career has mostly consisted of publishing horror, but most recently she lost her editing job and has joined the ranks of the woefully unemployed. Desperate to pay the rent, Lussi's final attempt as an editor leads her to a prestigious publisher called Blackwood-Patterson. The building is old, the publisher has lost its way, and Lussi dreads working for this snooty “hardback” company.

During the job interview, Lussi reminds the owner that Blackwood-Patterson hasn't produced a bestselling novel in over a decade. There's some banter back and forth on horror novels and the owner's idea that it's a distasteful genre. Rudely, she's asked to leave. But, before her departure, Lussi spots an old German doll (the hideous Nazi Devil Doll) in the owner's office. While handling the creepy toy, the owner has a heart attack and dies.

The owner's son has distanced himself from the publisher and isn't enthralled with the idea of running the company. After talking with Lussi, he requests that she work for him to reverse the publisher's declining sales performance. In doing so, Lussi introduces the concept of genre publishing and focuses on horror manuscripts that have been rejected. But, they haven't just been rejected. They have been placed in the building's dark and dusty basement to rot with rat feces and mildew. Needless to say, the publisher really hates genres (and would despise Paperback Warrior).

Lussi spends her time reading some good horror manuscripts and pissing off the charismatic chief editor nicknamed The Raven. But, at the annual office Christmas party, Lussi involuntarily takes part in a Secret Santa game where inebriated employees receive gifts from anonymous co-workers. Lussi's gift ends up being the creepy, disturbing Nazi Devil Doll from the former owner's office. Soon, Lussi realizes that her co-workers are being injured or killed based on the murderous magic of this ancient relic.

Secret Santa works as an average horror comedy. It's gross in all the right places and contains the obligatory funny dialogue to glue it together. I enjoyed the 1980s publishing lingo and Lussi's quest to find the next Stephen King, Dean Koontz or Peter Straub (the trinity of modern horror). Lussi is a lovable protagonist and the assembly of characters made it enjoyable. In terms of horror, I liken it to Grady Hendrix's Horrorstor - a new employee takes on a difficult assignment while battling workplace horror. If that's your thing, then Secret Santa is a wonderful gift.