The Penetrator #02 - Blood on the Strip 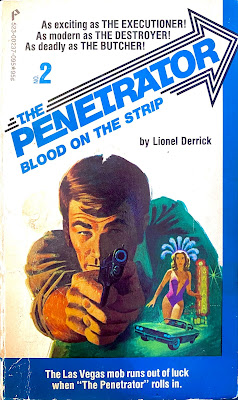 With the success of The Executioner, Pinnacle began creating titles that captured the action-oriented, vigilante feel. In 1973, the publisher released The Target is H, the first novel of The Penetrator series. It ran a total of 53 installments under the house name of Lionel Derrick. The odd numbers were written by Mark K. Roberts and the even installments by Chet Cunningham. I enjoyed the series debut and wanted to revisit the character. The second entry, Blood on the Strip, was published in October, 1973.

Cunningham begins the novel with an eight-page prologue recapping the character's origin story and events from the first book. The series can be read in any order and features hero Mark Hardin as a Vietnam veteran fighting crime vigilante style. He's aided by two behind-the-scenes allies in Professor Hawkins and a Native American named Red Eagle. This opener explains that Hardin destroyed a California mob family and he's now prowling Las Vegas searching for his next mission.

The book's opening chapters has Hardin detonating charges at a talent agency called Starmaker. After, he heads to Professor Hawkins and Red Eagle to summarize events in Vegas. Thus, his recount to them makes up this entire novel and explains the sequence of events that led to Starmaker's fiery destruction. I like when books start with the conclusion and then map out how these events developed. It's like starting with the Oreo stuffing.

Hardin meets a young woman named Sally Johnson, an aspiring model and actress trying to earn a living in Vegas. At a restaurant bar, she advises Hardin that the talent agency she is using wants her to begin stripping and prostituting. When she refuses, they issue violent threats. When Hardin attempts to escort Johnson to her car, he's jumped by enforcers of the agency. Sally is cut to shreds and left to bleed out in the parking lot. Thankfully, she's rushed to the hospital and Hardin begins assembling a plan of attack.

Cunningham's narrative keeps a steady pace as Hardin investigates the agency and its owner. In what will become a familiar formula, the investigation leads to some hit and run tactics destroying parts of this immense criminal empire. The villain behind the agency is like a knockoff female nemesis of James Bond. She keeps sex slaves locked in cages and eventually captures Sally to lead Hardin to her enforcers. Readers know how the story ends, but the ride is a lot of fun.

Since this was Cunningham's first Penetrator novel, I think this installment is a feeling out process. Hardin doesn't necessarily behave in the same manner in future novels and it becomes less elementary and neanderthal. Roberts had a better version of the hero in the debut, but Cunningham eventually finds a connection to the character and delivers equally enjoyable installments (so I've been told). If you love  the 1970s men's action-adventure genre, The Penetrator is in the upper echelon.