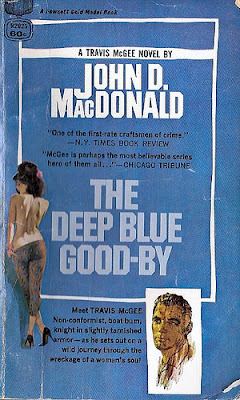 Crime-fiction author John D. MacDonald began the Travis McGee series with three novels, including The Deep Blue Good-by, originally published in 1964 by the powerhouse publisher of the time, Fawcett Gold Medal. The novel introduces McGee as a salvage consultant that helps clients recover stolen funds. The deal is that if McGee can successfully make the recovery, he keeps a percentage plus additional funds to cover expenses accrued. MacDonald's niche is that McGee performs most of these jobs in and around the Floridian coast on his houseboat, the Busted Flush. I've enjoyed MacDonald and wanted to explore this popular character a little more. I'm starting with the “official” series debut, The Deep Blue Good-by.*

In the book's opening chapters, McGee's newest lady “friend” asks what he does for a living. McGee explains the nature of his business to her and soon gains a referral in the form of a young, voluptuous dancer named Cathy Kerr. McGee's new client is rather reserved and quiet, but explains that her father served in WW2 and had been sentenced to prison for killing another soldier. Prior to his capture, Cathy feels that her father buried something valuable in the building materials of his house in the Florida Keys, but it was stolen by a man named Junior Allen. Her father is now dead, the valuable thing is still missing and Cathy is dancing for peanuts. McGee explains the terms of the deal and becomes involved in an enthralling mystery.

The search leads McGee to Lois Atkinson, a woman who was abused and robbed by Junior Allen and left in a near-death state. McGee, with the aid of the good doctor, nurses Lois back to heath and learns even more about this dubious Mr. Allen. McGee and Lois eventually form an emotional bond that spills over into sex – Lois requiring security and McGee seemingly recovering from some ailments of the past (the series will later hint at his military career, lost loved ones, etc.).

McGee embraces the mantle of the noble hero, bent on punishing Junior Allen for the atrocities he's committed and the young lives he's ruined. McGee's investigation is multifaceted - what is the valuable thing, how did Cathy's father obtain it, where is it now? The job combs a great swath of area from Florida to New York and points in between. The more McGee learns, the more vicious and terrifying Allen becomes. The inevitable confrontation leads to a boat chase and a spectacular fight scene on board.

Like James Bond, or any popular fictional hero, one can jump into numerous rabbit holes online to learn more about the character and the series (movies, color scheme, boat, etc.). We even covered the character on a podcast episode here, so there's a lot to explore if you are interested. I went into the novel thinking it would be a fun, sexy splash in the water with comparisons to a more violent Shell Scott. I couldn't have been further off.

This was more like Lawrence Block's early Matthew Scudder novels, just a little more sexy. Junior Allen proved to be a calculated, sick psycho with a penchant for power grabs. McGee's clients are victims, some more scarred and disgruntled than others. I truly felt a sense of obligation to these victims, as if McGee was righting a personal wrong for me. The ending was an emotional roller coaster that left me gutted. The closing scenes with McGee and Cathy had such an impact, and set the tone for the character. He's the hard-boiled hero, but thankfully it's complex.

Sexy, violent, captivating, and mysterious, The Deep Blue Good-by is a masterpiece that you need to read right now. Or, reread it again. There's an obvious reason for the fuss...Travis McGee is the real deal.

* MacDonald authored the first three Travis McGee novels in quick succession and submitted all of them to the publisher at the same time. To my knowledge, no one really knows which was the very first.